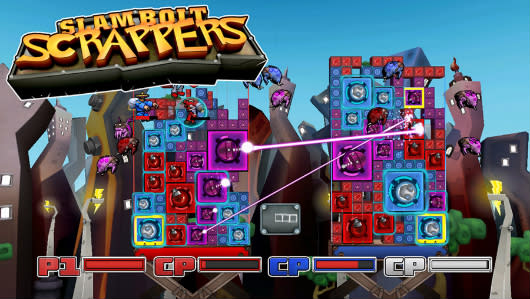 President of Boston's Fire Hose Games, Eitan Glinert, breaks down four types of indie developers he sees in the wild:"If you're already famous, that's great, but if you don't have that stuff it's just so hard to get your thing off the ground," Glinert says. There are options for first-time developers – submitting a game to IGF or the PAX 10, or being featured on big websites – but he says there are still roadblocks in the current system.

"I'm sick of it – and it's a solvable problem," he says. He may have solved it, with help from the rest of the team: Fire Hose Games is transitioning into an indie incubator, with plans to take on fresh developers and offer them a place to work, a monthly living wage, revenue share when their games launch, plus advice, experience and a creative atmosphere.

"We want to go ahead and remove the hurdles to game development that these small indie developers face, and we can get some absolutely phenomenal talent in the process," Glinert says. "It's a big win-win. We help these developers make the games they want without all the burden of getting all these bits and pieces aligned, when all they want to do is make the game. We get fantastic talent in the process; we get great games in the process and we're all helping each other."

Fire Hose Games' résumé includes Steam and mobile games Slam Bolt Scrappers and Go Home Dinosaurs, and it's had a hand in mainstream games such as Rock Band Blitz, Dance Central and Ms. Splosion Man. Plus, Glinert co-founded the Indie Megabooth. Fire Hose has advice to spare for first-time developers.

Fire Hose's indie mentorship idea is inspired by tech incubators such as Y Combinator or TechStars – with a Boston twist, at least at first. To launch the program, Fire Hose wants to host about six local developers, with the hope of having as many as 30 in 18 months. Eventually, Glinert says he sees incubators across the nation, but that's way down the road.

Besides, the precise number of participants may vary, depending on the amount of funding Fire Hose can pull in from investors.

"We're raising investment money right now," Glinert says, and then he imagines a Scrooge McDuck money vault that he and the Fire Hose team can swim around in. When he stops laughing, Glinert admits that's not what he expects to end up with:

"I kind of think in indie development, the bets tend to be a little bit smaller, but the way the industry is going, I think it's a really ripe area for investment. There's a lot of money to be made in video games and [investors] know you can make money in video games, but people aren't quite sure how to do it anymore. The AAA model is looking shakier than ever. The only bets that seem safe are these long-lived brands, Call of Duty 19 or Grand Theft Auto 45. Those are the games that you know are going to be big. Even a game that's newer, that people are super excited about and is great, may not do as well."

Glinert points to BioShock Infinite, a game that scored highly with critics and players, but was still outsold by yearly franchises.

"The brands tend to be what survives," Glinert says. "AAA development is scary as hell for developers. Indie development is also scary as hell because it's just so tough to pick the winners and losers ahead of time, unless you happen to have a celebrity game developer that you know is going to be big right out of the gate. This is a way for us to make lots of bets in a way that financially makes sense."

If Fire Hose can't raise any money from investors, the incubator is still going to happen, just on a smaller scale. Fire Hose has been tinkering with the model for half a year, and it wants to launch this thing at a wider scope than current funds allow. Of course there's a risk that no one will invest.

"We want to grow, we want to go faster with this," Glinert says. "If we don't get the money we'll just have to do it at a slower rate, which would be unfortunate. But so far, I'm not too concerned about that. The response has been really positive. It really resonates. It's a simple idea, it hasn't been executed – it's ridiculous it hasn't been executed."

No, really – it's absurd that Fire Hose is the first company to pursue an indie incubator program, Glinert says. Like sticky notes, doorstops and the plastic thing you slide up a tube of toothpaste to get all the paste out, this is an obvious solution.

"We're actually kind of annoyed that this doesn't exist already," Glinert says. "Do you ever have an epiphany about something that should exist? Like, 'Why doesn't that exist? We should go out and make that happen.' I feel like there are all these indies that are just totally spread out. We all talk to each other, we all know each other, and we have the same problems over and over that people are trying to tackle. Sometimes you can get advice, but if there was just one central place where people could work together and pool resources, it would work so much faster. It's ridiculous that this doesn't exist."

It should exist soon, if Fire Hose's plans with investors and the public go smoothly. Glinert is presenting the idea for the first time to local developers at Boston Postmortem tonight.
In this article: boston, fire-hose-games, Indie, indie-incubator, Investment
All products recommended by Engadget are selected by our editorial team, independent of our parent company. Some of our stories include affiliate links. If you buy something through one of these links, we may earn an affiliate commission.