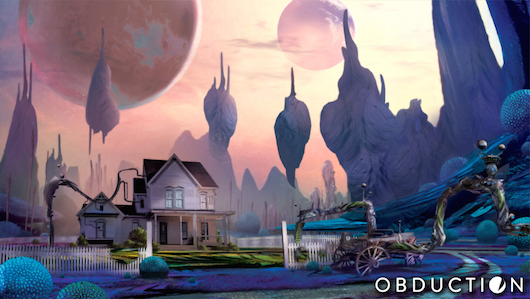 Obduction, the upcoming first-person adventure game from Myst creator Cyan Inc, has reached $1.2 million with its fundraising campaign. The project is being built with the strengths of Myst and Riven in mind - players will be abducted by an artifact and placed upon a bizarre world with a minimalistic explanation. Answering questions beyond that is up to the players.

The project's Kickstarter page explains that "even the toughest puzzles should be designed so that you know that all the pieces to solve it are there in front of you." Those pieces may indeed be present, but if Obduction is to be anything like Cyan's previous works, grabbing a notebook and forming a team amongst friends to persevere might not be a bad idea.

Windows and Mac users will be among Obduction's targets, once it begins kidnapping people in "mid-to-late 2015."
Show full PR text
Hello Joystiq,

This morning, Cyan, Inc. reached the original goal of 1.1 M to fund our next game concept, Obduction. With less than 60 hours left in the campaign, Cyan, Inc. will be reaching out to backers to attain the additional funding needed to meet stretch goal levels.

Stretch goals for Obduction at the 1.3 M level include VR support using Occulus Rift and localization. At the 1.7 M level, an additional world will be added to the game along with Roadtrip Mode! To find out more about these stretch goals, we invite you to visit the updates page for the Obduction Kickstarter.

The entire Cyan team wishes to thank you very much for your support and for getting the word out there for us!

As always, you are welcome to contact us with any requests, questions, or comments.
In this article: cyan, cyan-inc, kickstarter, mac, myst, obduction, pc, riven
All products recommended by Engadget are selected by our editorial team, independent of our parent company. Some of our stories include affiliate links. If you buy something through one of these links, we may earn an affiliate commission.