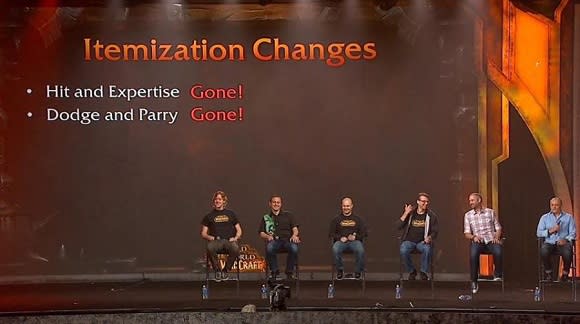 BlizzCon this year was a magical time to be a tank, learning what we did about all the changes coming down the pike in Warlords of Draenor. It seems that Christmas is coming early this year, with Blue Claus having decided that (for once) we're getting just about everything on our lists. Whereas Mists was in many ways an experiment in how tanking could work going forward -- with DPS stats galore -- Warlords is going to officially set those changes in stone and even expand on them!

I can't remember the last time I was as stoked as I was then, sitting in those seats and reading the word "GONE" next to dodge/parry. It was like something out of a dream. You always dreamed it would happen and then finally it does... There's just no way to prepare yourself for that kind of elation. And, believe me, the other changes they announced are just as good.

This was totally expected and very much hinted at, but it was nice to finally see it confirmed: hit and expertise as stats are going away, and all melee and ranged will be soft-capped by default. My one concern with this is what that means for our proclivity of hard-capping expertise to prevent parries and smooth out our active mitigation. Not sure if there'll be some innate hard-capping for tanks added later or if we just need to suck it up and deal with parries. Hopefully the former.

Even more exciting: dodge and parry are being removed as stats, full stop. They'll still exist, and one of the devs hand-waved that avoidance may result from an attack or something (ie, an expansion of active mitigation) but we would not be able to actively gear for passive avoidance.

As a side note, there is a new tertiary stat named avoidance being added to the game, but that only passively reduces damage from area-of-effect attacks, like the on-use effect of Rook's Unlucky Talisman. As a whole, tertiary stats look really cool and I'm pretty excited to see how they work out in the grand scheme of things.

Nonetheless, I honestly was not expecting a complete removal of avoidance stats, I figured they'd roll the two into one stat, or at the very least pledge to not have pieces with both at the same time. This is a treat, what we have here.

Armor is going to come back to the game as a secondary stat you can accumulate, but apparently only on limited, "role-focused" pieces like jewelry, cloaks, trinkets, and weapons. That's great news, armor was always an excellent stat, and should be pretty desirable in Warlords as well (if history is any guide).

I got a chance to screw around with the Warlords demo on the convention floor and take a peek at the newly squished stats. I only tried retribution during the demo (I know, shameful) which had 30k hit points, while protection was apparently at 45k -- what a crazy difference from potentially having a million right now! Regardless of how much smaller the numbers were, the game still felt very much the same. I don't think we have much to worry about with the item squish, as long as Blizzard sticks to keeping tanks from being two-shot and doesn't mess that up in the shuffle.

Lastly, the reforging removal has interesting implications. With reforging, ilevel and at least one excellent secondary stat was pretty much the prime determinant of whether a piece was an upgrade, since you could take 40% of the crap stat and move it to something better (aka, haste). Without reforging I assume we're going to be much, much pickier about what pieces we go for.

If you thought I was excited about the removal of dodge/parry -- that change has nothing on this. In an interview with some blues, they revealed that Vengeance is being changed to only affect "tanking abilities" -- that is, defensive abilities. Further, they intend for tanks to be generally tuned at 75% of the damage of an actual DPS player. You know what that means, right? Vengeance will have absolutely no effect on tank damage output -- only survival.

It makes perfect sense, after all. With the itemization changes, there is no "tank gear" anymore, just plate or leather. Instead of tanks loading themselves up with pieces saddled with avoidance stats, we'll be grabbing the same haste or mastery or whatever other damage-affecting secondary stats that any other DPS player would be accumulating. There won't be the same dramatic diverging curves in tank damage vs. DPS damage as a result, as the former loads up on survivability stats and the later damage stats.

This is a monumental change -- cataclysmic, even. Tank damage won't be heavily nerfed outside of raids anymore because it can be consistent across all content types. For those masochistic types among us who preferred doing dailies in tank spec, suddenly you won't need to rely on accumulating a throng of mobs to put out a decent amount of damage and kill them all before you have to log off for the night.

Off tanks will actually be able to contribute to raid damage in a respectable manner, rather than feebly poke the boss as their attack power fizzles away after a hand-off.

One of my biggest complaints about Vengeance has always been how weak it makes a tank feel outside of actively tanking raid content (the heavier-hitting the better). It's going to be a wonderful change in psychology to not feel like you're wasting your time running around in the world in your preferred (protection) spec, or that you can still contribute to an encounter in a meaningful way while you wait for a debuff to tick off and you can taunt the boss back.

I won't go too far into these because it's so early and they are so likely to change, but the level 100 talents as a whole are fairly uninspiring thus far. But that's not really their fault, it's too early and they're far too untested to be chiseled into something yet more exciting.

Holy Shield returns in one, which would probably be worth it for anytime you're going to deal with a lot of mobs, like an add fight or challenge modes. Otherwise 10% block chance is ok, I guess, but it's nothing to write home about.

Empowered Seals is pretty much just an extra HoT spell, giving us 3% of maximum health back every 2 seconds -- pretty boring all in all. Then again, if you can have more than one Empowered Seals buff at a time, that will have more interesting (and tedious) implications thanks to seal swapping. Here's hoping that's not the case.

And Seal of Faith is the most interesting of the three, but also the weirdest. When active, you'd do 30% less damage, but bank that damage into Faith which will boost healing spells. Could have interesting implications with Word of Glory or Eternal Flame (then again, they announced the removal of DoT snapshotting), but either way I expect it's something that will be iterated a bunch.

Ultimately, with all these changes in mind, I'm a pretty happy camper right now. I cannot wait to see how all of this develops as we get closer to and then into beta, and then towards the eventual expansion release!

The Light and How to Swing It shows paladin tanks how to combat the Sha in the strange new land of Pandaria. Try out the new control gearing strategy, learn how to make the most of the new active mitigation system on your tankadin, and check out how to deck out your fresh 90 tank to get ready for any raids!
In this article: featured, guide-to-paladins, guide-to-pallies, guide-to-pallys, paladin-guide, paladin-info, paladin-protection-the-light-and-how-to-swing-it, paladin-talents, paladin-warlords-of-draenor, pally-guide, pally-info, pally-talents, protection-paladin-the-light-and-how-to-swing-it, vengeance, warlords-of-draenor, wow-paladin, wow-paladin-info, wow-paladins, wow-pally, wow-pally-info
All products recommended by Engadget are selected by our editorial team, independent of our parent company. Some of our stories include affiliate links. If you buy something through one of these links, we may earn an affiliate commission.