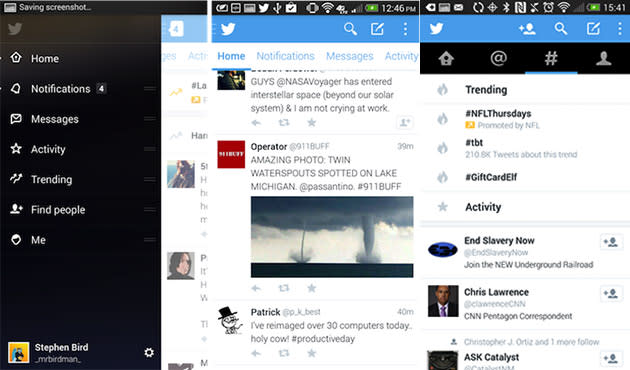 A bunch of Twitter's alpha and beta testers for Android might have fired up their apps today, and thought they'd been kicked out of the program. After all, the social network recently scrapped the new design it debuted to intrepid early adopters in September and brought its older look back. The familiar buttons take their place on top of the app again, replacing the menu that allowed testers to swipe their way from one stream to another. Twitter took elements from both designs, though, so it isn't a complete throwback to the old interface. Alpha users, in particular, see an entirely different Discover section that features a basic list view and a detailed view that shows sample tweets. Also, the prompt that pops up when you post a tweet comes with a note that reads "Are you in [city, state]?" below "What's happening?" According to TechCrunch, the microblogging site has been getting mixed feedback from its testers, which could've influenced the firm's decision. Whatever the real reason is, it looks like Twitter has more than a few kinks left to iron out before it unleashes an overhauled app to the general populace.

In this article: android, app, mobilepostcross, SocialNetworking, twitter
All products recommended by Engadget are selected by our editorial team, independent of our parent company. Some of our stories include affiliate links. If you buy something through one of these links, we may earn an affiliate commission.