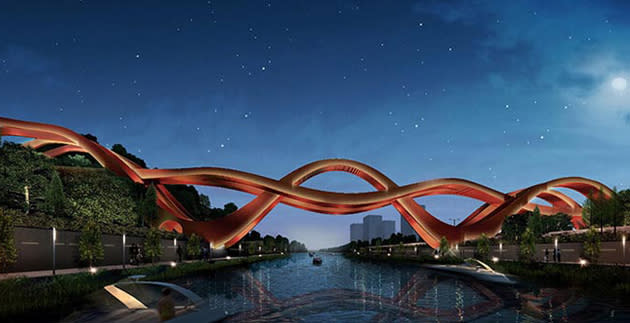 Apple's new headquarters is perhaps the most hotly anticipated building in the country, and the company just released a new set of images of the spaceship-shaped building. The new renderings provide a detailed look inside the ring-shaped building. Another ambitious proposal could be coming to life: The folks behind a futuristic marine-research vessel known as the SeaOrbiter just launched a crowdfunding campaign. Construction on the knife-shaped vessel is expected to begin next spring. On the gadget front, a pair of engineering students at Duke University has discovered a new way to charge smartphones with WiFi -- and they say the power-harvesting device is even more efficient than a USB charger.

People in the Philippines are still trying to restore order after a devastating super typhoon struck the Pacific archipelago. Meteorologists are now warning that climate change will make extremely powerful storms like Typhoon Haiyan more common. In the wake of the storm, Inhabitat rounded up eight of the world's most innovative emergency shelter designs. Speaking of disaster recovery, a new offshore wind turbine farm just began operation off the coast of Fukushima. The wind farm is a positive symbol of the future of renewable energy next to one of the worst nuclear disasters in human history. China continues to take the lead on green energy, as a new report finds that the nation is on track to build more renewable power plants through 2035 than the US, the European Union and Japan combined. Minesto just unveiled a prototype of its innovative underwater kite, which can produce energy from ocean currents. And researchers at the University of Sheffield have discovered that radioactive waste could be trapped inside glass for safer storage.

In the world of architecture and design, One World Trade Center was officially crowned the tallest tower in the US, taking the title from Chicago's Willis Tower. NASA awarded USC professor Behrokh Khoshnevis with a grant to develop 3D-printed space homes. In Kyoto, a new capsule hotel recently opened with state-of-the-art sleeping pods that are available for only nine hours. NEXT Architects took first place in a design competition for what will likely be the world's coolest pedestrian bridge in China. The wavy bridge is modeled after the Möbius strip and Chinese knots. And architecture firms REX and Front have proposed building a 400-foot sun-responsive sculpture that would shield the Nasher Sculpture Center in Dallas from the glare from a neighboring glass tower.

A UK design firm built a lofty tree house with curving rope bridges that is inspired by the spiraling Fibonacci sequence. Meanwhile, a team of horticulturalists has just successfully cloned an ailing giant sequoia planted by conservationist John Muir at his family home in Martinez, Calif. In 3D printing news, a team of eco-technologists just unveiled an open-source project for designing intelligent beehives that monitor and track the health and behavior of bee colonies. Bioengineering expert Alan Faulkner-Jones has suggested that 3D printing could soon bring about an end to animal abuse in drug testing. And 3D-printed disposable panties are apparently a thing now. In the wake of Fukushima, a Japanese swimsuit maker rolled out a new line of anti-radiation underwear and wetsuits that can protect you from contamination. And if you're looking to get an early jump on holiday shopping, check out Zazzle, a company that lets you make customized holiday gifts that are emblazoned with family photos.

In this article: beehives, bridge, ecofriendly, green, inhabitat, mobius, transportation
All products recommended by Engadget are selected by our editorial team, independent of our parent company. Some of our stories include affiliate links. If you buy something through one of these links, we may earn an affiliate commission.