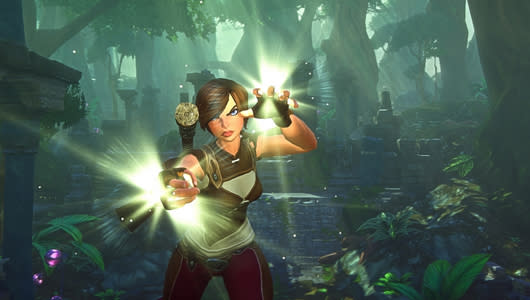 In an interview with GamerHubTV, Sony Online Entertainment president John Smedley hinted at a PlayStation 4 release for the studio's next big MMO, EverQuest Next. Smedley was coy on the details, explaining, "We haven't announced technically that we're putting it on the PlayStation 4, but it's fair to say that we're a Sony company, so I say that with a smile on my face. Can't wait to see it on PS4."

Smedley cited the PS4's eight gigs of ram and connection to the PlayStation Network as major strengths for the SOE development team, claiming that developing for PS4 is like "developing on a really super high-end PC." SOE is no stranger to console MMOs; the studio brought both DC Universe Online and Free Realms to PlayStation 3 and is porting both DCUO and PlanetSide 2 to PS4 with the former already live.
In this article: console, consoles, dc-universe, dc-universe-online, dcuo, eq, eq-next, eq-next-landmark, eqn, eqn-landmark, everquest, everquest-next, everquest-next-landmark, f2p, fantasy, fps, free-to-play, freemium, john-smedley, landmark, microtransaction, microtransactions, mmo-shooter, mmofps, planetside, planetside-2, PlayStation, playstation-3, playstation-4, playstation3, premium, ps2, ps3, ps4, sandbox, sci-fi, shooter, soe, sony, sony-online-entertainment, superhero, superheroes
All products recommended by Engadget are selected by our editorial team, independent of our parent company. Some of our stories include affiliate links. If you buy something through one of these links, we may earn an affiliate commission.