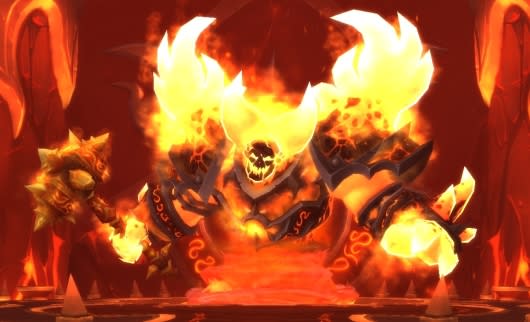 There's probably no one in the world who really wants go back through the Cataclysm raids in World of Warcraft. It's something you do because you like the looks of items and want to walk around looking pretty, not because you just can't get enough of that content. Since this content generally can't be just powered through alone, you have to get several like-minded people willing to revisit old content in the hopes that you might get some vanity items... which is easier said than done, and it's not all that easily said.

Pretty much any game has a backlog of old content that's no longer relevant. An obvious solution is to just make this something that players can explore alone and easily; if no one's going back here as a challenge, wouldn't it make sense to just let everyone cruise on through as a tourist? But there's also the option of making it relevant in some fashion again, some way to make you feel you're not just pounding your head against content that provides a non-trivial but irrelevant challenge. So what do you think? Should old content be made easier for newer players or characters? Should it be made more relevant in some way? Or is it just fine to let it lie and let the people who missed out just keep on missing out?

Every morning, the Massively bloggers probe the minds of their readers with deep, thought-provoking questions about that most serious of topics: massively online gaming. We crave your opinions, so grab your caffeinated beverage of choice and chime in on today's Daily Grind!
In this article: content, daily-grind, dungeons, endgame, old-bosses, old-content, old-endgame, opinion, quests, relevance, tdg, the-daily-grind, worth
All products recommended by Engadget are selected by our editorial team, independent of our parent company. Some of our stories include affiliate links. If you buy something through one of these links, we may earn an affiliate commission.