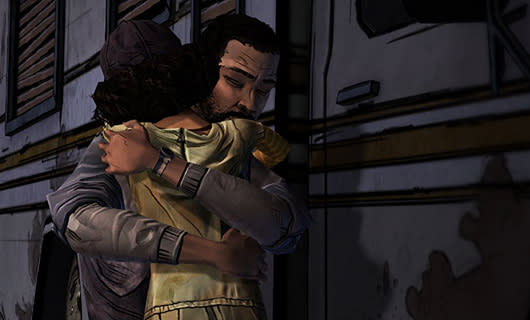 Having sold more than 21 million episodes, Telltale Games' phenomenal adaptation of Robert Kirkman's graphic novel The Walking Dead has inevitably been collected in a Game of the Year Edition.

Available now for $30 on either Xbox 360, PlayStation 3, PC or Mac platforms, the Walking Dead: GOTY includes all five episodes released during Season One of The Walking Dead as well as the DLC episode 400 Days. Inside the package players will also find "access to behind-the-scenes content and the emotionally-charged score from our long-time friend and composer Jared Emerson-Johnson," according to Telltale CEO and co-founder Dan Connors.

Those planning to buy the PC or Mac versions of The Walking Dead: GOTY should know that you can earn a 10-percent discount on the game by pre-purchasing Season Two of The Walking Dead. Today's announcement offers no new information on those upcoming episodes of the series, but we can rest assured that Telltale still plans to launch Season Two "later this year."
Show full PR text
SAN RAFAEL, Calif., Nov. 19, 2013 /PRNewswire/ -- Leading publisher of digital entertainment Telltale Games and Robert Kirkman, the Eisner Award-winning creator and writer of The Walking Dead for his Skybound imprint at Image Comics, have announced that The Walking Dead: A Telltale Games Series 'Game of the Year Edition' is now available for purchase at retailers across North America for Xbox 360® video game and entertainment system from Microsoft, PlayStation®3 computer entertainment system and PC for $29.99 USD or equivalent. The Game of the Year Edition includes all-five episodes of the award-winning series, plus the critically-acclaimed episode '400 Days,' as well as access to the series' original score and exclusive behind the scenes video.
Previously available only for download, '400 Days' bridges the gap between Season One and Season Two of the series, and was met with critical acclaim from websites such as Gamespot who awarded the episode an Editor's Choice rating, calling it, "...one of the most imaginative, gripping, brutal, and best-written stories that you will experience all year."
"This all-inclusive edition of The Walking Dead's first season is an incredibly exciting package for fans both old and new, and one of the best ways to catch up on the story before the upcoming premiere of Season Two," said Dan Connors, Co-Founder and CEO of Telltale Games. "With the inclusion of '400 Days' and access to behind-the-scenes content and the emotionally-charged score from our long-time friend and composer Jared Emerson-Johnson, we're proud to offer this definitive edition of Season One."
Additionally, expected to premiere digitally later this year, The Walking Dead: Season Two – A Telltale Games Series will consist of five episodes that will be released for digital download over the course of the season and will conclude in 2014. Players can save 10% off of the purchase price of the PC/Mac versions with a pre-order of the season pass, giving them access to all five episodes for the total cost of $22.49 USD or equivalent when ordering through the Telltale Online Store, or through the Steam digital distribution service.
To date, The Walking Dead: A Telltale Games Series has sold more than 21 million episodes worldwide, earning more than 90 Game of the Year honors from outlets including Metacritic, USA Today, Wired, Spike TV VGAs, Yahoo!, The Telegraph, Mashable, Polygon, Destructoid and GamesRadar, and was also the recipient of two BAFTA Video Games Awards for Best Story and Best Mobile Game.
The Walking Dead is set in the world of Robert Kirkman's award-winning comic book series and offers an emotionally-charged, tailored game experience where a player's actions and choices affect how their story plays out across the entire series.
The Walking Dead: A Telltale Games Series – Game of the Year Edition is rated 'M' (Mature) for Blood and Gore, Drug Reference, Intense Violence, Sexual Themes and Strong Language by the ESRB. Content included in The Walking Dead: Season Two has not yet been rated by the ESRB.
For more information on the game, visit the official website, Facebook, and follow Telltale Games on Twitter. For more information on The Walking Dead, Robert Kirkman, and all of his titles, visit www.Skybound.com and www.TheWalkingDead.com.
About Robert Kirkman
Robert Kirkman's success and passionate advocacy for creator-owned comics led him to become the first person invited to become a partner at Image Comics since the company's inception twenty-one years ago. Kirkman is the creator/writer of the Eisner Award-winning The Walking Dead, long-running Invincible, all-ages Super Dinosaur and Thief of Thieves. In 2010, Kirkman formed his own Image imprint, Skybound, which publishes his own work and Witch Doctor, Invincible Universe, Clone and Ghosted. Kirkman has earned the respect of the comic, writing and television communities and topped the New York Times bestseller list for graphic novels in 2011 and 2012. In April 2012, he took the top five spots on both the hardcover and paperback lists. He's the creator/executive producer and writer of the hit Emmy®-winning television show, AMC's The Walking Dead, the highest-rated basic cable drama of all time in the U.S, also an international success in 122 countries and 37 languages. Your destinations for all news and merchandise from Robert Kirkman, The Walking Dead and all Skybound titles are www.Skybound.com and www.TheWalkingDead.com
In this article: dan-connors, mac, microsoft, pc, playstation, ps3, telltale-games, the-walking-dead, the-walking-dead-game-of-the-year-edition, xbox, zombies
All products recommended by Engadget are selected by our editorial team, independent of our parent company. Some of our stories include affiliate links. If you buy something through one of these links, we may earn an affiliate commission.