Hands-on with Dustcloud, a game that lets you virtually shoot your friends... for a price 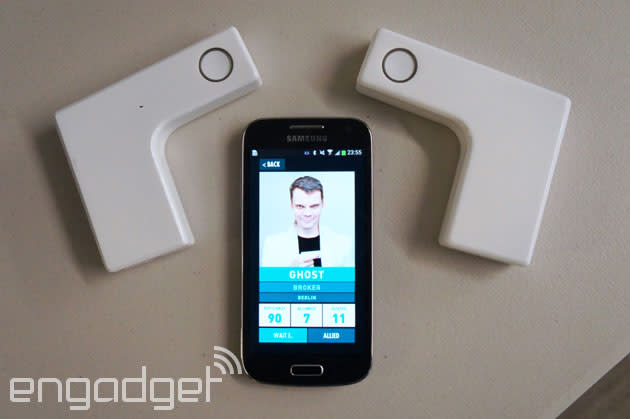 It's Monday morning at your local coffee shop, and you pause over your vanilla latte to ponder another customer. That face, you think to yourself, I know it. Whipping out your smartphone you check a social networking app, and it's as you suspected: he's an opponent. He needs to be dusted.

Meeting the game's creators at Haxlr8r, we were dissuaded from likening the game to laser tag. Dustcloud does use electronic guns and invisible bullets (dubbed "Dusters" and "Speks," respectively), but it doesn't use lasers. Speks are transmitted via Zigbee, which affects gameplay in two major ways: shots can't be blocked by a user's body or clothes, and the weapons have a range of only about 5 meters. This means showdowns will happen in fairly close quarters, and players need to be discreet. The Duster itself seems to match this gameplay style, and can easily be hidden in the palm of a hand. We found the toy's trigger in an odd place, pressed with the index finger on the end of its "barrel," but company founder Howard Hunt told us it's a more discreet firing mechanism than a traditional trigger. It's more like playing a hitman game, he told us, than a free for all -- and a more subtle weapon is a better fit. Wireless guns and close quarter digital assassinations is all well and good, but what makes the Dustcloud really interesting is the "cloud" aspect. Duster guns wirelessly sync (via Bluetooth) with the player's smartphone, instantly uploading their stats and player data as the game goes on. The app also works a kind of social network, letting players find opponents and make allies with other Dusters in their area. Take someone out? They're added to your profile's "dusted" list. Get dusted yourself? Send your allies after your nemesis; a push notification will tell them you're looking for revenge. Oh, one more thing: Speks aren't free. Every shot you fire potentially costs you ten cents, and getting dusted will cost you your Duster's full five-round clip.

It's an interesting proposal: a game that can be played anywhere at anytime with complete strangers with a small monetary hook that keeps players on edge. Still, the game only really works if enough people buy in - you need a local community of players to make it worth your while. Although the company currently has a Kickstarter campaign in draft, Hunt told us the project is likely to surface on IndieGogo in the next few weeks. Looking for some gear? Backers will be able to pick up a Duster and 300 specs for $79 after the campaign launches. Check out the game's Kickstarter draft at the source link below.

In this article: dustcloud, game, Haxlr8r, Kickstarter, mobilepostcross, urban warfare
All products recommended by Engadget are selected by our editorial team, independent of our parent company. Some of our stories include affiliate links. If you buy something through one of these links, we may earn an affiliate commission.