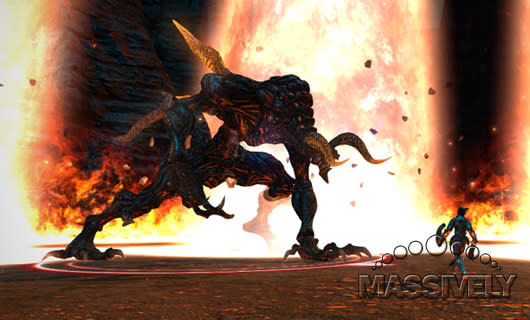 During Final Fantasy XIV's live producer's letter that aired this morning, Naoki Yoshida offered players a look at a variety of new features coming in 2.1 and dropped the date and name for the patch. A Realm Awoken will hit servers on December 17th in Japan (which could translate to December 16th in the West, depending on the time of day).

Throughout the stream, Yoshida fielded player questions while discussing the upcoming content, which includes, but is not limited to, new gear, the Crystal Tower content, new hard-mode dungeons, extreme primal battles, veteran rewards, and Dragoon adjustments. You can read up on the answers in the Q&A thread available on the forums. An additional look at 2.1, including the PlayStation 4 version, is coming in the next live producer's letter on December 14th. We'll update you with the full recording as soon as the official Q&A summary goes live!
In this article: 2.1-A-Realm-Awoken, 2.1-patch, A-Realm-Awoken, console, consoles, fantasy, ff, ff14, ffxiv, final-fantasy, final-fantasy-14, final-fantasy-xiv, Naoki-Yoshida, new-content, patch-2.1, PlayStation-4, producers-letter, producers-letter-live, PS4, square, square-enix
All products recommended by Engadget are selected by our editorial team, independent of our parent company. Some of our stories include affiliate links. If you buy something through one of these links, we may earn an affiliate commission.