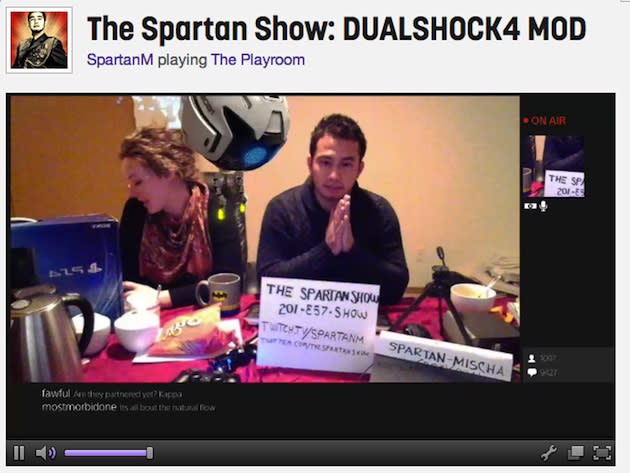 Members of the PC gaming elite and console players with add-on hardware have been live streaming their gaming exploits for years, but a new generation of consoles means everyone's 15 minutes of fame one step closer. While many gamers are unpacking new Xbox Ones tonight, one couple has used a PS4, Sony's Playroom demo, the PS4 Eye camera add-on and Twitch to broadcast a studio-style show. Regis Michael Strahan and Kelly they're not (for better or worse), but the show is a hit for now, with Sony exec Adam Boyes joining as a call-in guest after its link was RT'd by the official @PlayStation account. You can check out the live stream of The Spartan Show embedded after the break and marvel at how a single game console and the desire to share a DualShock 4 mod has lead to over 1,000 viewers (and growing). We'll see if the teased PS3 raffle comes to fruition, but ambitious gamers may want to polish their studio patter and set building skills before taking on Kimmel, Letterman, Leno and the rest.

Cool to dial in to the @thespartanshow even though I sound sick as a dog!

So people are using The Playroom to stream their own internet show via PS4 Twitch http://t.co/5zRtJ00X5A

In this article: adamboyes, hdpostcross, playstation4, ps4, sony, twitch, video
All products recommended by Engadget are selected by our editorial team, independent of our parent company. Some of our stories include affiliate links. If you buy something through one of these links, we may earn an affiliate commission.