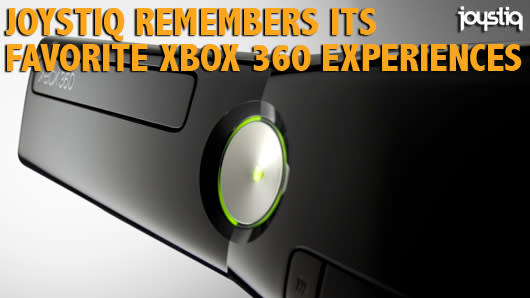 With the release of the Xbox One, Microsoft joins the new generation of gaming consoles alongside Sony and Nintendo. Though the Xbox 360 still has at least three years of life left in it, the Xbox One moves into the spotlight as Microsoft's chief gaming console. Partly to pay homage to this past generation of gaming and partly to bid farewell, some of the Joystiq staff have gathered to offer their favorite memories with the Xbox 360.

Of course, these are just a few of our favorites and not indicative of exactly just how many wonderful games we've been able to enjoy on the Xbox 360 (Xav said his pick would be playing Shadow Complex, for example!). Share your favorites in the comments below – that is, if you're not too busy Snapping Netflix on your Xbox One right now.

Make sure to watch our PS3 Memories video feature, and stay tuned for a look back at the Wii next week!
[Music: The Protagonist - "Pink Fuzz"]
In this article: microsoft, xbox, xbox-one, xbox-one-launch
All products recommended by Engadget are selected by our editorial team, independent of our parent company. Some of our stories include affiliate links. If you buy something through one of these links, we may earn an affiliate commission.