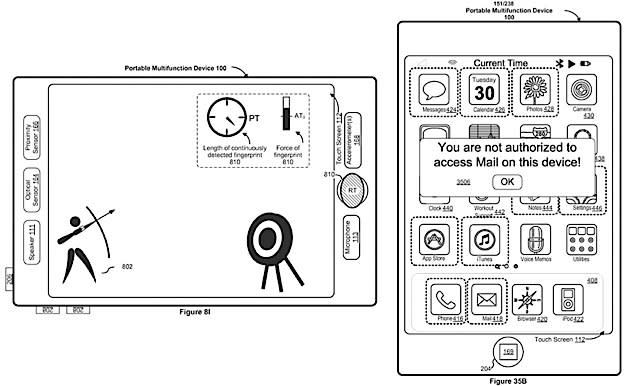 Arguably the most notable characteristic of the iPhone 5s is the TouchID fingerprint sensor, which lets you unlock your phone and authorize app purchases simply by resting a pre-authenticated fingertip on the home button. It turns out, however, that Apple might've had plans for the technology that go far beyond just that. According to a patent application filed with the World International Property Organization, the Cupertino company may use TouchID's sensor technology to transform the Home button into a trackpad, similar to the ones on BlackBerry's older line of Curve handhelds. Indeed, the patent filing describes how users could navigate the phone by "revolving" or "twisting" their fingerprint on the button's sensor. Additionally, the sensor could measure the length of time and amount of pressure that is placed on it, which might lead to more interesting use-cases in apps or games.

What's even more intriguing, however, is that the document goes on to describe how the entire display can be used to read your fingerprints. This sounds like a crazy idea at first, but if implemented, the phone would then know exactly which finger of which hand is on the screen. This could lead to certain actions mapped to specific digits -- perhaps a long-press of your index finger could launch Maps, while a pinch of your pinky and thumb could open up Messages, for example. A few diagrams from the patent application show how screen-wide fingerprint recognition could be used for playing a piano or touch-typing on the virtual keyboard. If you're concerned that this could lead to serious battery drain, the patent even addresses that, stating that the phone would be smart enough to recognize when it's in moments of fingerprint recognition (i.e. "enhanced sensitivity") or when it's normal everyday use, otherwise known as "reduced sensitivity."

Further, it seems that enhanced sensitivity could just be restricted to small screen areas so that only certain apps -- like banking or email perhaps -- would be cloaked in that extra layer of protection. Of course, just because such functionality is filed away in a patent application doesn't mean we'll see this in real life. However, taken with the promise of Apple's recent acquisition, we'll admit we're very interested to see how the iPhone 6 will turn out. Those interested in patent minutiae can go ahead and peruse the rather lengthy 612-page document in the link below.

In this article: apple, fingerprint, iphone, iphone6, mobilepostcross, patent, touchid, wipo
All products recommended by Engadget are selected by our editorial team, independent of our parent company. Some of our stories include affiliate links. If you buy something through one of these links, we may earn an affiliate commission.