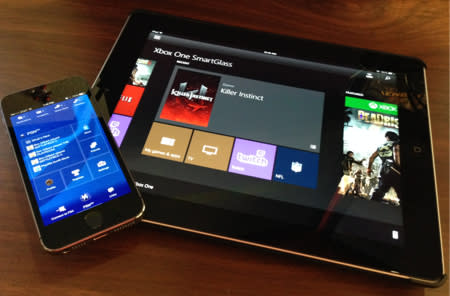 In the past two weeks the gaming world got a jolt of life in the form of the PlayStation 4 and Xbox One, and while the previous game console generation was all about motion controls, it's clear that the new machines will use second screen functionality and apps as major weapons of war. Both Microsoft and Sony launched iOS apps ahead of their respective console debuts, and I've spent a great deal of time with both of them.

These apps are bound to change a lot as we move further into the current console battle, but since both company are trumpeting the apps as selling points for their hardware, I'll do my best to break down the pros and cons of each and declare a winner. Setting up
Getting a gamer to do anything but grab a controller and demolish everything in sight is difficult -- I know because I am one -- so ease of use is an important factor for these totally optional apps.

Both apps require that you sign into your respective system accounts via username and password before allowing you to sync with the consoles. Once you're signed in, both apps can quickly spot your game console on your local network, but the PlayStation App requires that you enter a special code from the console's settings menu before attempting to sync. The Xbox One SmartGlass app, on the other hand, syncs with just a tap. Social features
Social integration is really where both apps excel - you can browse friends, see who is online, send messages, and view activity on both. The PlayStation App gains a slight advantage here for two reasons: The interface allows a faster at-a-glance summary of what your friends are up to, and the app also lets you browse players you've recently met online, even if they're not your friends. Console control
There's a pretty good chance you're going to be messing around with these apps while sitting in front of your TV, so the ability to control the system itself is obviously extremely convenient.

The PlayStation App, despite requiring that you be in front of the console to sync during initial setup, doesn't offer anything in the way of direct console control. The PlayStation App does have console control commands, though they're hidden under the "Connect to PS4" tab (seriously, I've been using the app for almost two weeks and I never noticed it when connecting). There's a bit of latency between input and commands registering on the screen, and there's no option to input face button commands aside from "Select" which usually the "X" button.

Using Xbox One SmartGlass is the exact opposite, providing a virtual controller capable of controlling virtually every aspect of the interface. There is practically zero delay between inputting commands and the on-screen reaction. You'd never want to control a game with it (and you can't, anyway) but it's as close to using a controller as you can get on an app so far. Shopping
While both console apps offer fantastic social experiences, they both stumble out of the gate when it comes to buying content.

Xbox One SmartGlass provides nothing in the way of an online store or any way to browse and buy new content for your console, and while the PlayStation App provides a "Store" icon on the main app screen, it simply links to Sony's PlayStation store web page. Microsoft does have a web store for the Xbox One, but it's not accessible from the app itself. Sony gets points for at least including it in the app, but neither experience is ideal. Design
The PlayStation App offers a more concise, streamlined experience ... for the iPhone. There's no tablet-optimized version of the app available (which is a bummer), so those with iPads will be left using the zoomed-in version of the iPhone 5 app. This is likely to change, as I can't imagine Sony not releasing an iPad edition of the app, but for now the tablet experience is sorely lacking.

Xbox One SmartGlass is gorgeous on both the iPhone and iPad, and both versions are device-specific. The iPhone version is designed vertically so that you can thumb through things (as you would on a phone) and the iPad version is laid out horizontally. This one isn't even a contest, really. Overall
Aside from the fact that the PlayStation App doesn't offer a tablet version, both of these companion apps are definitely a step in the right direction. Both of them let you remain in touch with your console communities while on the go, and there's very little headache in getting either of them set up initially.

That being said, the Xbox One SmartGlass app is more polished and provides a more uniform experience with its host console. The ability to control the console itself is a huge plus, and there's no contest between the two apps when used on a tablet. It's going to be an interesting console generation, and both apps will grow and change as we move along, but at the moment Xbox One SmartGlass comes out on top.

In this article: iOS, iPad, iPhone, microsoft, playstation 4, sony, xbox one
All products recommended by Engadget are selected by our editorial team, independent of our parent company. Some of our stories include affiliate links. If you buy something through one of these links, we may earn an affiliate commission.