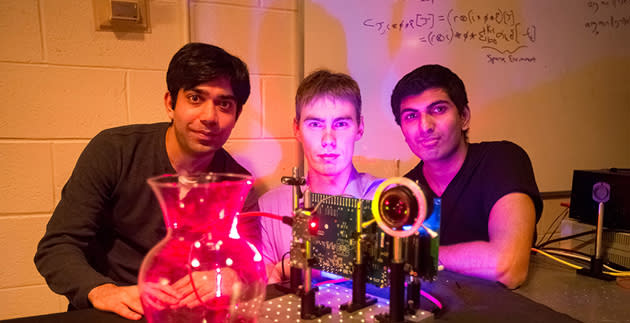 Remember that camera that takes 1 trillion exposures per second? Well, the illustrious folks at MIT have outdone themselves (again) by developing a camera that accomplishes all that and more, for just $500. Similar to the recently released Xbox One Kinect, this three-dimensional "nano-camera" is based on "Time Flight Technology." That means an object's whereabouts are calculated by measuring the time it takes light to reflect off its surface and return to the sensor. But, thanks to some fancy math, the nano-cam can capture translucent and moving objects in 3D, using a new encoding method. In the past, the results of the process (which has been dubbed "nanophotography") could only be achieved with a $500,000 "femto-camera." With such a dramatically lower price tag, it could be a solution to one of the many hurdles facing self-driving vehicles: the ability to tell the difference between a puddle and a cat in the pouring rain. And, even though it functions like a Kinect, don't expect it to be standard issue with an Xbox Two (or One II, or whatever Microsoft decides to call it).

In this article: MIT, nano, nano camera, nanophotography, photography, self-driving car, speed of light
All products recommended by Engadget are selected by our editorial team, independent of our parent company. Some of our stories include affiliate links. If you buy something through one of these links, we may earn an affiliate commission.