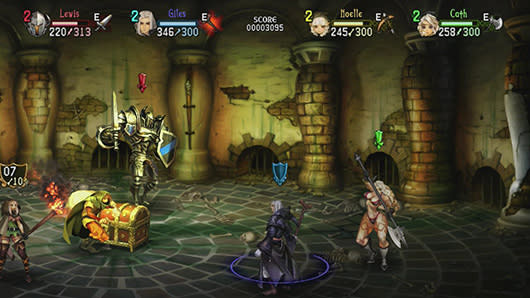 Though not a retailer in the traditional sense, Atlus couldn't help but be caught up in the festive spirit of Black Friday and has slashed prices on nearly its entire catalog of games.

Notable highlights include PlayStation 2 cult hit Odin Sphere for $5, Demon's Souls for $13.49 and Persona 4 Arena for $15 (or $23 if you opt for the game's Ultimate Edition which includes all of its DLC additions). If you're looking for a more recent release, Atlus has also discounted both PS3 and Vita versions of Dragon's Crown (each is now priced at $30), while also reducing the price of Shin Megami Tensei 4 from $50 to $30.

As far as caveats, they're generally positive this time around. Most importantly, you should get a jump on these prices, as this sale is already going on. Atlus planned the sale to kick off on November 26 and it will run through December 3. What's more, you won't need to brave rabid crowds of human detritus to score these cheap games. All of the discounts Atlus has prepared for its especially lengthy Black Friday celebration are available either online or in retail stores. Now, when Turkey Claus comes gobbling down your chimney, you can wave off his gifts and instead devour his plump, succulent body in front of friends, family and a Dallas Cowboys game, just as Abraham Lincoln intended.
In this article: 3ds, atlus, atlus-usa, black-friday, discount, dragons-crown, nintendo, playstation, playstation-vita, ps3, sale, vita
All products recommended by Engadget are selected by our editorial team, independent of our parent company. Some of our stories include affiliate links. If you buy something through one of these links, we may earn an affiliate commission.