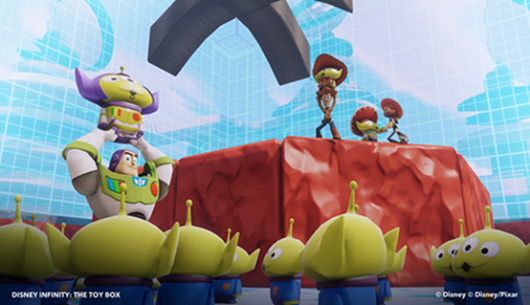 cid:image003.png@01CEEB76.88F1F670
"Toy Story Claw" Toy Box
LONDON, UK – [27th November 2013] – Today Disney Interactive is giving players access to five new Disney-created Toy Boxes in appreciation for all of the support from the community. Check out the latest episode of the new web series, "The Disney Infinity Top 5 Toy Box Countdown," for a look at the complimentary Toy Boxes: http://youtu.be/67RF5Eo-5gY
To download new screenshots of each new Toy Box, please visit: www.dis-press.com
Details for each Toy Box are below:
· Toy Story Claw – Find the 10 lost aliens and return them to their ship! Drop them into a ESPN hoop for extra credit.

· Big Thunder – Race through a mine inspired by the classic Disneyland attraction Big Thunder Mountain Railroad.

· Sky Gauntlet II – Play the sequel to the original Sky Gauntlet Toy Box ... with an even more challenging course!

· Toy Story Racer – Ready, set, to Infinity and beyond! Race the AI in this Toy Story in Space-themed racetrack.

· The Sky Trials – Test your courage and wisdom to finish puzzles and get rewarded.

When you're ready to submit your Toy Box for consideration, follow these directions:
Xbox 360, PlayStation 3, Wii U
· Bring up the Pause Menu and select "Online/Multiplayer."

· Follow the prompts. You'll be asked to give your Toy Box an original name and description. Choose carefully – they will be shown to everybody if your Toy Box is featured.

· Follow the prompts. You'll be asked to give your Toy Box an original name and description. Choose carefully – they will be shown to everybody if your Toy Box is featured

About Disney Infinity
Disney Infinity is an all-new video game initiative starring the beloved characters from Walt Disney and Pixar Studios' most popular franchises. Players can place real-world toy versions of favorite Disney characters onto a device called the Infinity Base and transport them into the virtual game worlds of Monsters University, the Incredibles, Cars, Pirates of the Caribbean, The Lone Ranger and Toy Story, as well as into a giant Toy Box. Disney Infinity is available in stores now for Xbox 360, PlayStation 3, Wii U, Wii and 3DS.
For additional information, check out www.disney.com/Infinity and join the Disney Infinity Facebook Community www.facebook.com/disneyinfinity
For the latest video assets, please visit www.youtube.com/disneyinfinity
Press Contact:
victoria.vengco@disney.com
In this article: Avalanche-Studios, disney, disney-infinity, Disney-Interactive, dlc, microsoft, nintendo, pc, playstation, ps3, tangled, toy-box, toy-story, wii, wii-u, wreck-it-ralph, xbox
All products recommended by Engadget are selected by our editorial team, independent of our parent company. Some of our stories include affiliate links. If you buy something through one of these links, we may earn an affiliate commission.