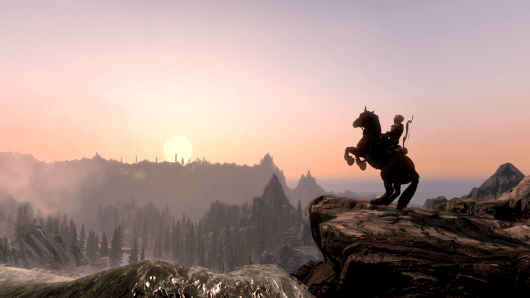 Nineteen-year-old Alexander Velicky's Elder Scrolls 5: Skyrim mod, Falskaar, was originally meant to be part video game, part Bethesda job application. Earlier this week, Velicky posted to the Bethesda forums that while Falskaar failed to land him a position at the company of Dovahkiin and friends, he has instead found gainful employment as an Associate Designer at Bungie. You could say his acceptance at Bungie instead of Bethesda means he just had a different ... destiny.

Velicky wrote that the experience gave him a "corny life lesson" he wanted to pass on: never be afraid to try. "I applied to many companies, and Bungie was in my, 'Huge company that will completely ignore me' category. Well, they didn't and look what it got me. Bungie is an awesome company with an amazing team, and I'm very lucky that they've decided to give me a chance! Never be afraid to try."

Velicky thanked the modding community for their support and encouragement, saying that he wouldn't be where he is without their support and encouragement. He also noted that he's "unsure" if he'll keep modding. Velicky's top priority will be his professional work, but he specifically called out the oft-rumored - but not yet formally announced - Fallout 4 as something that he may not be able to resist.

Good luck at your new job, Alexander!
In this article: alexander-velicky, bethesda, bungie, elder-scrolls-5, jobs, mods, pc, skyrim, the-elder-scrolls-v-skyrim
All products recommended by Engadget are selected by our editorial team, independent of our parent company. Some of our stories include affiliate links. If you buy something through one of these links, we may earn an affiliate commission.