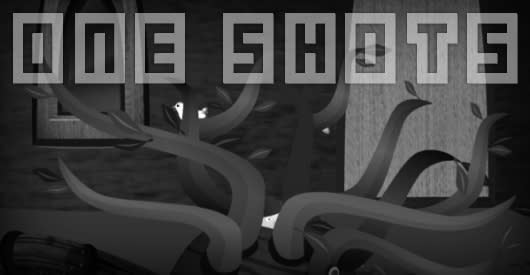 Will there ever be a game as visually distinctive and memorable as Glitch? Considering that I'm still getting screenshots in from a game that was canned almost a year ago, I doubt it.

Reader Phinneas gave me this maddening puzzle that has consumed my days as I pore over it looking for the chicken. Where? Where? Where could it be? Under that tentacle-plant-thing? Under the next? Lurking beyond the frame? Oh, what trickery is this?

"This picture is of my favorites of the game's last few days," Phinneas said with an implied taunt in his voice. "I still hold out hope that it will be resurrected someday."

As I continue to look for the chicken, you can move on to the rest of our week's submissions! Reader Yrys -- a name that can only be pronounced by an Elf who is whistling -- mailed in this view of the interior of Lord of the Rings Online's Tower of Orthanc. Because I am prone to way overthink such things, I started to ponder just what a pain it would be to live in such a place.

For starters, how do you dust that high and get all of the windows? Just how freezing would that place be in the winter? Would every fart and throat-clearing echo throughout the entire place? Does the staff go to the top and drop pennies down on adventurers?

And then I remember that "magic" is probably the answer for these and get on with my life. Reader Elliott either has a fondness for public sculptures or adventuring in Dark Age of Camelot. "This is a generator from the Trials of Atlantis era," he wrote. "I like how it shows off a bit of the PvE in this game, which I guess most people don't think about much. It had its moments, and I always thought the game's landscapes and environment art was great." While none of you has yet to help me out with a Warhammer Online deluge for its imminent shutdown, at least I have this picture on file from The Big D. "Here's a strange graphical bug that made the mob look like Mr. Fantastic," he wrote.

Bug or special feature? If you're in the PR business, you can spin any mistake into an asset! This week's screenshot challenge is simple: goofiness. Send in something goofy, something silly, something wacky, or something otherwise nutbar-like. I think it won't take much for most of you to do so.

Want to be featured in a future edition of One Shots? Send your favorite MMO screenshots to oneshots@massively.com, and don't forget to include your name, the name of the game, and a description of the scene. Large, colorful, UI-free shots that tell a story and really show off the game make for the best images. Look ma, we brought back One Shots!
In this article: back-to-beta, beta, bioware, bring-back-one-shots, browser, browser-based, camelot, casual, classic-mmo, daoc, dark-age-of-camelot, ea, electronic-arts, endless-trial, f2p, fantasy, flash, free-to-play, galleries, gallery, glitch, hipster, lord-of-the-rings, lord-of-the-rings-online, lotro, mythic, mythic-entertainment, mythology, one-shots, pics-or-it-didnt-happen, pvp, reader-screenshots, reader-submissions, rvr, sandbox, screenshot, screenshots, tinyspeck, turbine, turbine-entertainment, unlaunchening, user-submissions, war, warhammer, warhammer-online
All products recommended by Engadget are selected by our editorial team, independent of our parent company. Some of our stories include affiliate links. If you buy something through one of these links, we may earn an affiliate commission.