Applebee's wants you to put your phone away on Tuesdays

Applebee's putting a tablet on every table, hopes to engage grease-covered fingers nationwide 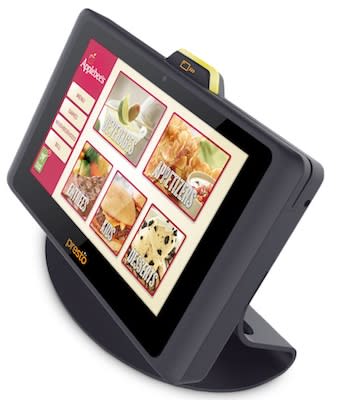 'Who hasn't felt like they've been held hostage waiting for a check to arrive?" That's a question posed by Applebee's president, Mike Archer. Frankly, we're having some trouble imagining that the home of desserts served in shot glasses would have find it difficult keeping customers entertained, but, well, that's the ever-shrinking national attention span for you. Thankfully, your local massive neighborhood grill chain has just the answer: a tablet on every table across the country, following similar plans from restaurants like Chili's. That's nearly 100,000 in all, letting customers pay for the check, order desserts and appetizers and play, say, Fruit Ninja, while waiting for that bacon cheddar cheeseburger to arrive. The tablets won't be replacing wait staff or physical menus, but the company hopes they'll go a ways toward engaging a a younger audience -- assuming anyone can see the seven-inch screens through the layers of onion ring grease.

Update: Applebee's has revealed more information about its new technology, and the E la Carte Presto tablets (pictured above) that it's using. They have Intel processors inside, an "all-day" battery, light up card reader and ruggedized design, plus a camera, Bluetooth and NFC for future capabilities. At launch they'll let customers pay at the table, order additional dinner items and drinks or play a few games, with plans to add video streaming, music, more games and social media hooks over the next 18 months.

In this article: applebees, restaurant, tablet
All products recommended by Engadget are selected by our editorial team, independent of our parent company. Some of our stories include affiliate links. If you buy something through one of these links, we may earn an affiliate commission.