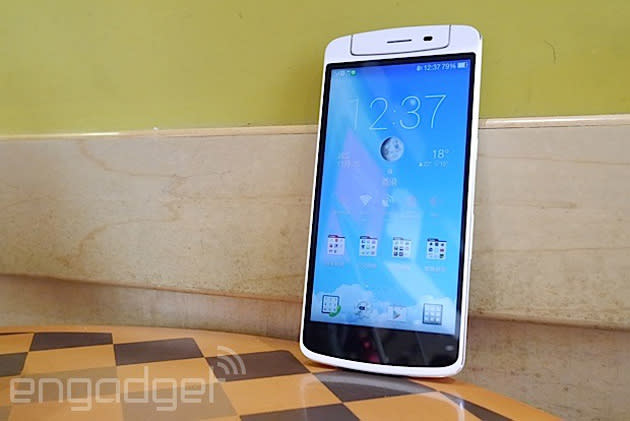 Oppo promised that its swivel camera-toting N1 smartphone would arrive in December, and it's making good on that promise today by offering international launch details. An unlocked HSPA+ version of the 5.9-inch Android flagship should be available through Oppo Style and other outlets on December 10th, when it will cost $599 in the US and €449 in Europe. The company hasn't said whether this is the 16GB or 32GB model. There's also no mention of whether or not N1s with CyanogenMod pre-installed will arrive on the same day, although those who get the ColorOS-based phone should have a relatively easy time loading Cyanogen's firmware. You won't have to wait until the 10th to find out if the device is worthwhile -- our colleagues at Engadget Chinese have just reviewed the N1, and they believe that it competes well against many of its global rivals.

In this article: android, coloros, cyanogen, cyanogenmod, launch, mobilepostcross, n1, oppo, oppon1, smartphone
All products recommended by Engadget are selected by our editorial team, independent of our parent company. Some of our stories include affiliate links. If you buy something through one of these links, we may earn an affiliate commission.