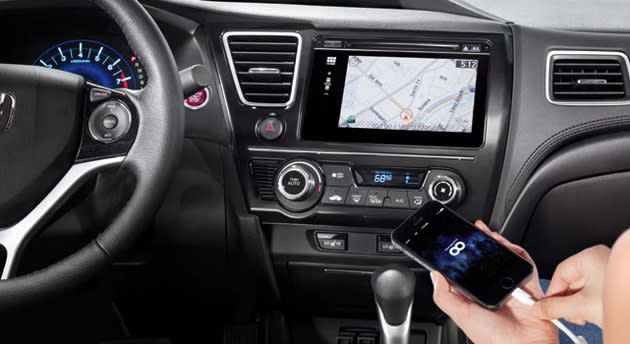 With certain exceptions, Honda isn't frequently on the vanguard of car cabin technology. However, we'll have to toss out our expectations now that the automaker has detailed the 2014 Civic's center stack. The vehicle will be Honda's first to use Display Audio, an infotainment system with multi-touch input much like that on your smartphone. Drivers can pinch the map to zoom in, for instance. There's also a big update to HondaLink in store -- iOS users can buy a $60 navigation app that sends Here Maps data to the compact car's 7-inch touchscreen, including turn-by-turn directions and traffic alerts. Siri Eyes Free is part of Display Audio, too. Motorists will get the technology as soon as the new Civic goes on sale tomorrow, as long as they buy at least the EX model. Frugal buyers will also find it in the 2015 Fit launching next spring.

In this article: car, civic, displayaudio, eyesfree, honda, infotainment, ios, multitouch, sirieyesfree, smartphone, transportation
All products recommended by Engadget are selected by our editorial team, independent of our parent company. Some of our stories include affiliate links. If you buy something through one of these links, we may earn an affiliate commission.