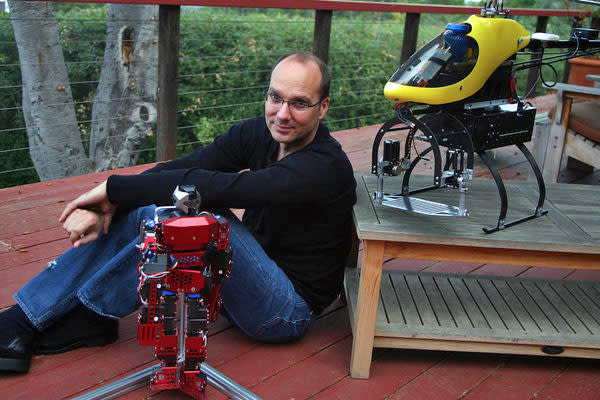 Not one to let Amazon get all the robots-are-our-future attention, Google's revealed that its already got plenty of projects underway, and they're headed up by Andy Rubin. Yep, the man who made the company's Android operating system arguably the biggest smartphone OS in the world. In the last six months, Google has managed to claim seven different technology companies en route to its very real robot plans, although its current target isn't the same millions that fell in love with a cute green avatar. No, it's more about manufacturing, increasing automation in factories using a high level of manual labor -- and probably making a load of money on the way. Rubin admitted in an interview with the New York Times that "you have to think of time as a factor". "We need enough runway and a 10-year vision."

The Googler was once a robotics engineer for Carl Zeiss, of world-class camera lens fame and the loose analogy for what he's aiming for with these new robot projects is a windshield wiper that knows when it's raining and otherwise needs no human intervention to do its job. It's a pretty simple way of looking at it, but it also lines up with what Google CEO Larry Page has said in the past about freeing up humans from repetitive tasks through technology. Page added on Google Plus (of course) that it was still "very early days" for the project but that he "can't wait to see the progress." And Rubin? "I have a history of making my hobbies into a career... This is the world's greatest job."

In this article: android, andyrubin, google, robot
All products recommended by Engadget are selected by our editorial team, independent of our parent company. Some of our stories include affiliate links. If you buy something through one of these links, we may earn an affiliate commission.