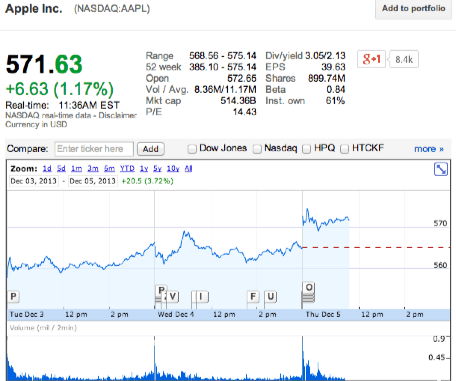 Perhaps it was the reports of huge volumes of iPads heading out the doors of retailers on Black Friday, or maybe it is Carl Icahn's shareholder proposal that's doing the trick. Whatever the case, shares of AAPL hit a 52-week high today, reaching US$575.14 at one point before retreating slightly.

With the new high for the year, the company's market value has now reached a whopping $515 billion, towering over the market cap of energy giant Exxon Mobil at around $412 billion. AAPL is now the world's most valuable publicly traded company again.

In this article: AAPL, Apple Financial, market cap, Share Price
All products recommended by Engadget are selected by our editorial team, independent of our parent company. Some of our stories include affiliate links. If you buy something through one of these links, we may earn an affiliate commission.
Share
Tweet
Share