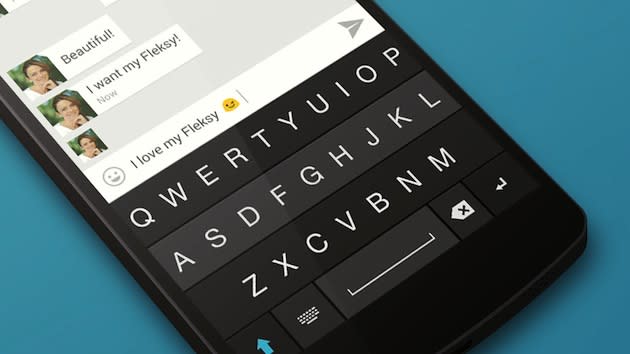 Almost a year after it made its debut, Syntellia's Fleksy keyboard for Android is finally out of beta. It actually arrived on Google Play six months ago, but was only available to those who joined the company's Google+ community as testers. Now anyone who wants to use Fleksy's predictive keyboard can go ahead and download it from Google Play -- it's free to try for the first 30 days, after which you'll need to fork over $3.99 for continued use. That doesn't mean Syntellia's done improving it however; it'll continue to keep the beta app alive for testing purposes. In fact, it rolled out a new update to the beta today that adds multiple language support.

Things are moving along on the iOS side of things as well. The company introduced Fleksy 2.0 for the iPhone a couple days ago with a completely revamped engine that promises better responsiveness, a new user interface that matches iOS 7, additional keyboard-hiding gestures, plenty of bug fixes and more. According to Fleksy founder Ioannis Verdelis, these changes are in preparation of the company's SDK launch with app partners that could result in users being able to replace the standard iOS keyboard, a huge first on Apple's mobile platform. We've reached out to find out just which apps have signed onto the SDK so far, and will be sure to update you when we find out. In the meantime, Android users can enjoy having first dibs at a keyboard so intuitive that it's been implemented on a smartwatch.

In this article: android, fleksy, ios, keyboard
All products recommended by Engadget are selected by our editorial team, independent of our parent company. Some of our stories include affiliate links. If you buy something through one of these links, we may earn an affiliate commission.