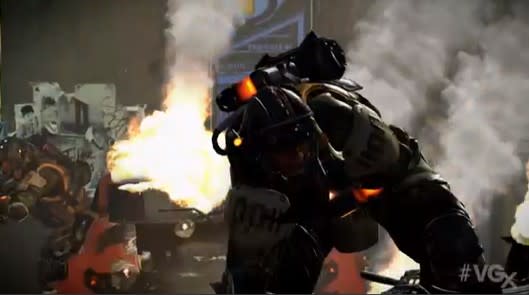 A secondary type of mech to the Titans, the heavy-plated Ogre, was revealed for Titanfall during Spike's VGX show. Ogres are a little heavier and slower in movement, but when you're waging war with jetpacks and mechs falling from the sky, options are good! When questioned about a beta, Vince Zampella explained that Respawn Entertainment is "thinking about it."

Respawn's debut effort for the new IP will be exclusive to the PC and Xbox platforms "for the life of the title." Titanfall's raging, acrobatic firefights will be open to all once the game titanfalls onto the PC, Xbox One and Xbox 360 on March 11. While that means there won't be a PS4 version of Titanfall, Respawn has clarified that they intend to bring other projects to the PS4. In this article: beta, ea, microsoft, pc, respawn, Respawn-Entertainment, spike-vgx-2013, titanfall, vgx-2013, xbox, xbox-one
All products recommended by Engadget are selected by our editorial team, independent of our parent company. Some of our stories include affiliate links. If you buy something through one of these links, we may earn an affiliate commission.