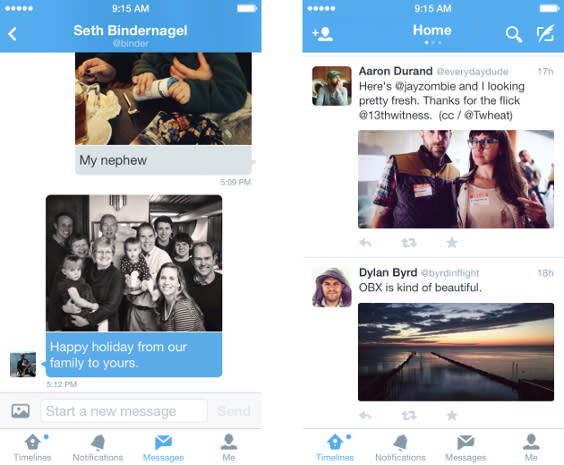 Well, it's not quite the dramatic redesign Twitter experimented with then largely scrapped, but today's update to its mobile apps still packs a pretty decent punch. For one, you can finally share images via direct message, which has until now been a text-only affair. The DM feature is also much more prominently displayed in the navigation bar, rather than buried in an inconvenient place. It's hard not to see the move as a response to Snapchat's growing popularity, which is built around securely and privately sharing images and short videos. It may also (for better or worse) put an end to scandals centered around publicly tweeted body parts. The iOS version is also taking a cue from its Android brother and moving to a more swipe-friendly UI. Now you can simply flick your finger across the screen to switch between your home, discover and activity timelines. The notification options have also been given a significant overhaul that adds plenty of flexibility. The Android version even lets you turn on notifications for individual users by starring their profiles. Hit up the iTunes or Google Play app stores now to download the update.

In this article: android, app, DirectMessages, ios, mobilepostcross, SocialNetworking, twitter, update
All products recommended by Engadget are selected by our editorial team, independent of our parent company. Some of our stories include affiliate links. If you buy something through one of these links, we may earn an affiliate commission.