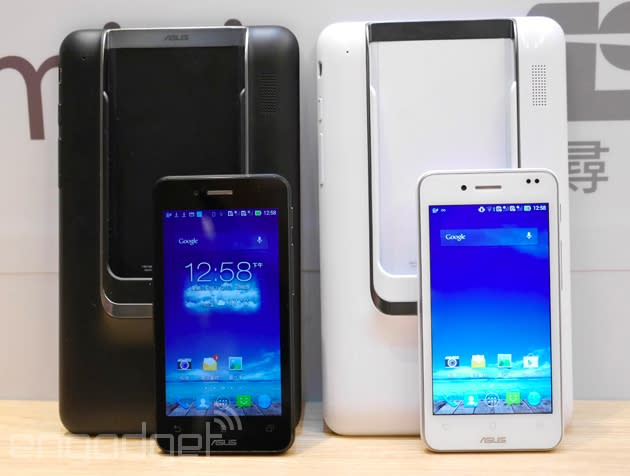 Confirming the rumors and leaks, ASUS has revealed its new PadFone Mini in Taiwan. A smaller alternative to the existing PadFone Infinity -- a line which CEO Jerry Shen tells us will reach the US -- it combines a 4.3-inch phone with a 7-inch tablet dock. Confirming the leaked details, it's packing a 1.4GHz quad-core Snapdragon MSM8226 CPU and 1GB of RAM inside, with a 960 x 540 screen on the phone and 1,280 x 800 resolution panel on its tablet. It has 16GB of storage and a microSD slot for expansion, with Android 4.3 software aboard plus 1,500 mAh and 2,200 mAh batteries in the phone and tablet, respectively.

As Shen mentioned during our interview, there are also some special tweaks like the Hi-Light "Owl Mode" and high speed continuous shooting aboard. The specs are a step down from the higher-end Infinity series, but as a result ASUS can offer both parts for an off-contract price of NT$ 11,990 ($405). This one is still only planned for release in China, Russia, Taiwan, Hong Kong, Singapore and Indonesia, but its unique combination of portability and price might make it worth bringing to the US as well.

In this article: asus, mobilepostcross, padfone, padfonemini, padfonemini4.3, taiwan
All products recommended by Engadget are selected by our editorial team, independent of our parent company. Some of our stories include affiliate links. If you buy something through one of these links, we may earn an affiliate commission.