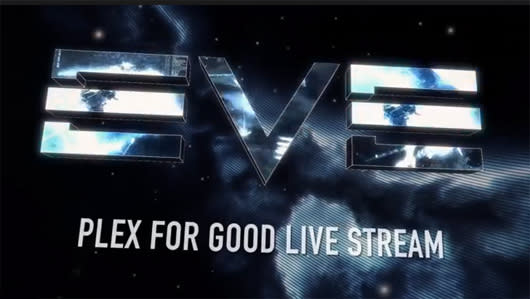 EVE Online players aren't all about intrigues and blowing each other up in New Eden, they are about helping others in this world. The community banded together in the recent Plex for GOOD drive and raised $190,890, all of which goes to the Icelandic Red Cross to help The Philippines recover from Typhoon Haiyan. CCP's development staff offers a very heartfelt thanks to its players for their generosity.

The drive, which included dozens of unique player-run efforts and culminated in a CCP telethon that lasted over eight hours, brought in 12,726 PLEX (equaling approximately 1060 years of playtime). The livestreamed telethon featured EVE Online devs who pledged things like head-shaving and sparring with a Tae Kwon Do champion when certain fundraising milestones were hit. Perhaps the most painful dev pledge was getting shot with one paintball for every $2,000 donated! Sprinkled throughout the telethon were other tidbits including a dev cooking competition, Q&A sessions, and more.

You can watch the follow through with the paintball pledge below, and catch the telethon in its entirety on YouTube.

In this article: ccp, ccp-games, charitable-donations, donations, eve, eve-online, internet-spaceships, PLEX-for-Good, PLEX-for_GOOD-telethon, sandbox, sci-fi, spreadsheets-online, telethon, Typhoon-Haiyan, Typhoon-Haiyan-relief, video, videos
All products recommended by Engadget are selected by our editorial team, independent of our parent company. Some of our stories include affiliate links. If you buy something through one of these links, we may earn an affiliate commission.