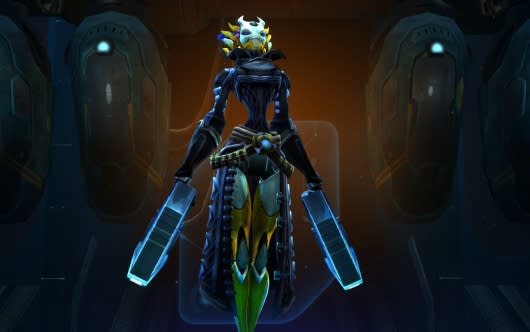 Character creators are a big deal to me. If I didn't have to make my characters quickly enough at launch to avoid losing my precious names, I would probably spend the better part of a month before clicking "create" the first time. So you know that the first thing I did when I sat down to play WildStar's recent press beta was to play around with the character creator.

All right, that's the first thing everyone does: You have to make a character, but I was playing that to win, people.

Character creation in MMOs usually falls short of what's offered in games like The Sims and Saints Row IV. At the low end you have games like Final Fantasy XI (pick a race, pick a face, pick a hair color, am I seriously done now?), and at the high end you've got Champions Online or the dearly departed City of Heroes. WildStar does not hit the high end, but it does do some things pretty nicely, even if it also misses some opportunities. When you first click to create a new character, you're given a fairly straightforward loadout. At the left are your options, at the right are descriptions, and in the middle is your character in a race-appropriate pose. The Granok look rough-and-tumble, the Draken look threatening, the Cassians are imperious, the Chua are scheming, the Aurin are bashful, and so on. Unfortunately, the starting armor does commit the cardinal sin of not being gender-unified; men get a jumpsuit while women get a low-cut top and hotpants. Come on.

Clicking on the faction icons at the top of the left interface swaps factions, and clicking any of the three listed elements -- Path, Race, and Class -- allows you to change your selection. Rather comfortably, you can still click between factions with one of those open, and the bottom of the race selection window shows the available classes for your selected race. It's clean and fairly straightforward.

At the bottom of all this is a button to customize your character appearance, and it's here that the creator earns some points. Clicking Customize immediately switches your character from his or her emote stance into a much more neutral position and zooms in so you have a clearer picture of what your character's face looks like, which is where the customization options center. Unfortunately, there are no body sliders in place, not even a simple height or mass slider.

You can call it stylized; I call it a major weakness.

Points are earned back by the surfeit of other options available. The face options avoid the common sin of having four or five faces that are functionally identical (hello, World of Warcraft) by keeping each face very distinct and offering sliders for fine adjustments. Sliders are bounded nicely to avoid giving a character clownish or freakish features, and while their individual effect is subtle, the overall impact is notable. Skin colors run the gamut. Humans are given a wide enough range of colors (and facial options) to feel true to life, and the other races really spread out to allow for varied options. Some of the colors are particularly striking; Granok, for instance, can have a skin tone that resembles a moss-colored stone, complete with patches of moss along their skins. You've also got a variety of race and gender-specific items available, some of which affect more than you might think. Mordesh eye color affects the color of their fluid containers, for example, and the eye color of the Mechari also determines the color of the crystals that serve as their "hair."

There are lots of individual options to like. Faces, for instance, are expressive and different for each race. The little custom touches are frequently appreciated. Cassian women can have earrings that give their ears a pointed appearance, Aurin have ear options that seem less like proper ears and more like fins, and Granok men can have beards of crystal. Draken have an impressive set of horn options and hair options. Non-humans actually feel, well, non-human, rather than just like humans with a few extra doodads here and there.

Also to the creator's credit, there is an option to save and load character options so you can pop back in to an old character and play around more. The save/load feature is done in a text string, as well, so you can even, say, copy the string, send it to a friend, and have him make an obvious sibling to your character. That, I like. It's not perfect. Hairstyles, for example, need work; we have several great ones now, but I want to see more. None of them is just a minor tweak to the others, but there are styles that exist for only one faction for humans, and all of the races could use a few more options.

There's also that lack of body sliders thing, and that's kind of glaring. I get the style that Carbine is going for here, but let me have my lithe and muscular Cassian lady and my runty Granok. I realize that there are far worse creators out there, but this is a problem I really would have expected to be fixed right out of the gate. Let us customize our characters a bit more. Obviously you guys know how to bind sliders at the right points so you're not going to end up with Chua towering over Mechari.

Overall, it's a solid character creator. It falls shy of the apex and a bit shy of some better creators (Final Fantasy XIV did most of the same things and had a height/muscle slider), but it's more than functional and fun to play with besides. Now, if you'll excuse me, I have an army of alts that I need to prepare for launch with some saved codes.
Don't miss the rest of today's WildStar coverage!

In this article: beta, betas, carbine, carbine-studios, character-creation, character-creator, character-options, class, classes, featured, ncsoft, opinion, options, preview, previews, race, races, sandpark, sci-fantasy, sci-fi, wildstar, ws
All products recommended by Engadget are selected by our editorial team, independent of our parent company. Some of our stories include affiliate links. If you buy something through one of these links, we may earn an affiliate commission.