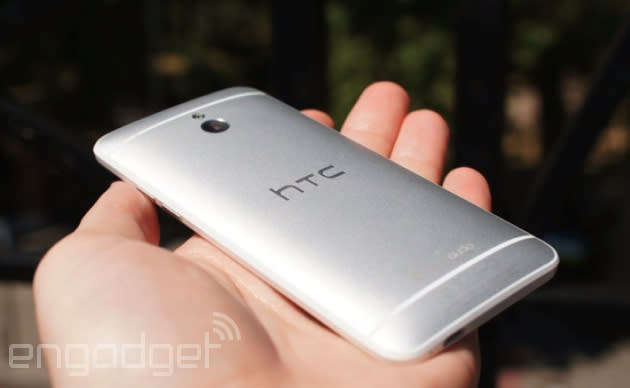 Nokia's recent legal victory over HTC, which imposed a sales ban on the latter's One mini in the UK, has ended up being quite short-lived. We've just learned from HTC that the Court of Appeals has suspended the injunction against the stunted smartphone, which also allows the firm to resume imports of the rest of the One family. The case is far from being closed, however, as HTC intends to "aggressively appeal the [patent] validity decision" that led to the One mini ban, and could yet impact its bigger brethren. Furthermore, to avoid future courtroom dates, HTC says it'll be engaging with its "chip suppliers on alternative solutions." It's almost certainly not the last we'll hear from this ongoing skirmish, but however many haymakers Nokia throws, HTC just keeps bouncing back. Full statement from HTC after the break.

HTC is delighted that the Court of Appeals has granted a stay on the injunction against our products. We will immediately resume shipment of all of our devices into the UK, including the entire HTC One family. Similarly, our customers should feel confident in their ability to promote and sell all HTC devices. Even though we plan to aggressively appeal the validity decision of Nokia's EP 0 998 024 patent, we will continue to work with our chip suppliers on alternative solutions to ensure minimal disruption to our business in the future.

In this article: htc, htcone, htconemini, mobilepostcross, nokia, one, onemini, patent, patents, uk
All products recommended by Engadget are selected by our editorial team, independent of our parent company. Some of our stories include affiliate links. If you buy something through one of these links, we may earn an affiliate commission.