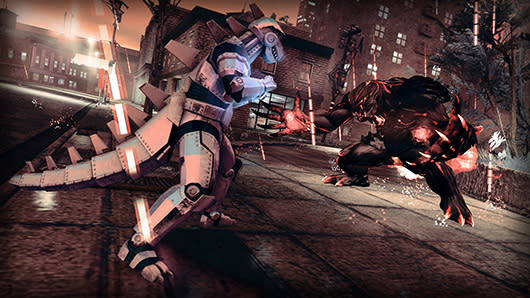 Sure, they're a bloodthirsty gang of polysexual criminals, some of whom literally get off on violence, yet the 3rd Street Saints also have a softer side, and a recent agreement to aid Child's Play proves as much in typical Saints Row style.

Here's how things work: If you pay a visit to Steam, you'll notice a new DLC pack for Saints Row 4 entitled "Child's Play Pack." All profits generated by sales of the $3 pack will go toward the Child's Play Charity, which seeks to outfit hospitals and family crisis centers with gaming machines in the hopes that kids might find comfort and solace in one of Mario's colorful adventures.

That's the happy, heartwarming bit, but this being a Saints Row joint, you just knew things had to take a turn for the wacky at some point. Included in that $3 charity DLC pack are two new skins for the PC iteration of Saints Row 4, a metallic simian named Robochimp and Digital Dino, which is either a clear homage to Mechagodzilla or proof that creating robotic dragons is just too cool for any development team to ignore for long.

Finally, the pack also includes a new vehicle, dubbed the "Retro Racer." It's not much of a vehicle, and looks like a cross between an amusement park ride and that bullet ship George Méliès shot at the moon in 1902. Still, in a world of weaponized dubstep and the vocal stylings of Biz Markie, this new ride barely registers as "quirky."
In this article: charity, childs-play, Deep-silver, dlc, pc, penny-arcade, saints-row-4, Volition
All products recommended by Engadget are selected by our editorial team, independent of our parent company. Some of our stories include affiliate links. If you buy something through one of these links, we may earn an affiliate commission.