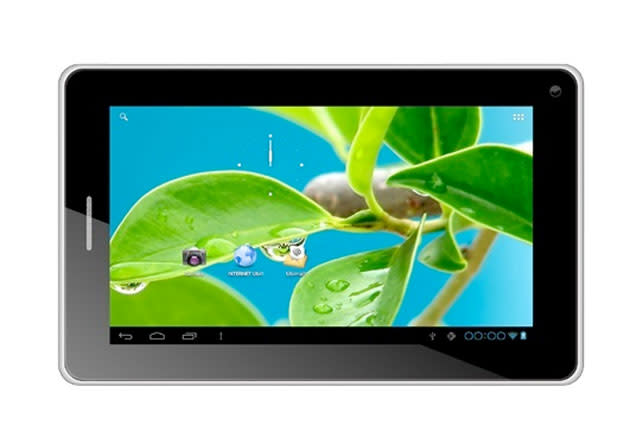 Remember the Aakash 2, India's $40 educational slate? It's finally making its way to the western world. The school-bound slab's manufacturer updated its UK website with three commercial variants of the devices, the UbiSlate 7Ci, 7C+ and 7Cz. Sound familiar? It should -- another version of the tablet (labeled 3G7) made its way through the FCC earlier this year, flaunting a 7-inch screen, a tri-band HSPA radio and a 2-megapixel camera. In fact, the federally inspected tablet matches the 7Cz in all but name, which offers a dual-core 1.2Ghz processor 8GB of storage and the aforementioned connectivity for £80. Knock that processor down to a 1GHz Cortex A8 CP, slash its (already meager) storage in half, and slow your wireless connectivity to Edge speeds and you're looking at the (currently unpriced) 7C+. Just looking for WiFi? That's the £30 7Ci, which Datawind specifically identifies as the consumer version of the Aakash 2.

These specs are far from impressive, but the Ubislate (and its predecessor) weren't built to compete with the Nexus 7: Datawind aims its devices specifically at schools, building a budget product that can help further the education of students on a budget. That said, the company's website seems to be little more than a placeholder for now -- the tablet's product pages are incomplete, and there's no way to order the devices just yet. We're exactly not jumping to put these devices on our Christmas lists, but it's good to see the fledgling tablet reach out to a wider market.

Update: All the above UbiSlate models are coming the US as well starting at $38, though the UbiSlate 7Cz will be known as the UbiSlate 3G7 in the US. As with the UK, there's no word on exactly when they'll arrive stateside.

In this article: aakash2, budget tablet, datawind, tablets, ubislate
All products recommended by Engadget are selected by our editorial team, independent of our parent company. Some of our stories include affiliate links. If you buy something through one of these links, we may earn an affiliate commission.