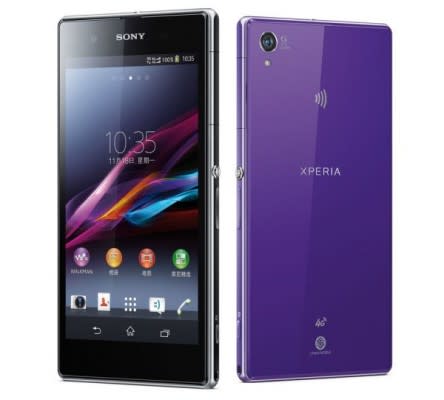 Three months after the launch of the Sony Xperia Z1, the flagship smartphone is coming to China Mobile -- but the handset as we currently know it isn't making the trip. This particular device (shown above) boasts nearly all of the same features and specs -- 5-inch 1080p Triluminous display, 2.2GHz quad-core Snapdragon 800, 2GB RAM, 20MP camera and 3,000mAh battery, for starters -- but the new model, also referred to as the L39t, has been bumped up to 32GB internal storage (up from 16GB in the international model) and now offers TD-LTE and TD-SCDMA/GSM support for carrier compatibility. Additionally, the sides are now reportedly made of plastic instead of metal and the headphone jack is centered. These are minor differences, but the new Z1 looks very similar to the T-Mobile version first leaked by @evleaks in October, which means it's quite possible we'll see more of this design in Vegas next month. If the T39t is right up your alley, get ready to pay up: it's 4,499 yuan ($724).

In this article: google, mobilepostcross, sony, sonyxperia, xperia, xperia z1
All products recommended by Engadget are selected by our editorial team, independent of our parent company. Some of our stories include affiliate links. If you buy something through one of these links, we may earn an affiliate commission.