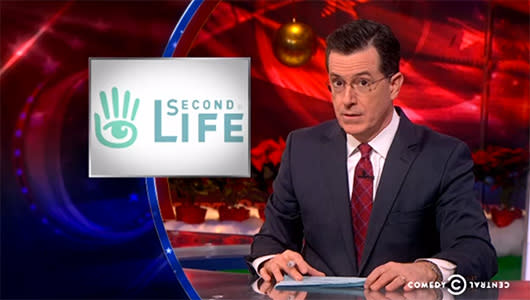 Last week John Stewart had a chance to slam the NSA for trawling for terror suspects in World of Warcraft, and now it's Stephen Colbert's turn to poke fun at national law enforcement's new fixation on Second Life.

The issue here stems from recent NSA documents which paint the organization as keen to infiltrate massively multiplayer online games. It believes that the relatively free, open chat systems in these games are rife with potential terrorist activity, though so far they've found nothing concrete (or at least nothing the public is allowed to know about).

You'll find footage of Colbert's episode beyond the jump, but the best bits start at the 1:00 mark. Whether or not the NSA is collecting valuable information is questionable, but at least they look like they're having fun in that virtual club.

Unlike the earlier Daily Show report which was rife with factual errors about the millennia-old Dwarven civilization that effectively shaped modern Azeroth, Colbert's discussion of Second Life is pretty spot on, even if he fails to mention the millionaire-hunting, flying penis drones.
In this article: colbert-report, comedy-central, daily-show, law, legal, mac, nsa, pc, stephen-colbert, World-of-Warcraft
All products recommended by Engadget are selected by our editorial team, independent of our parent company. Some of our stories include affiliate links. If you buy something through one of these links, we may earn an affiliate commission.