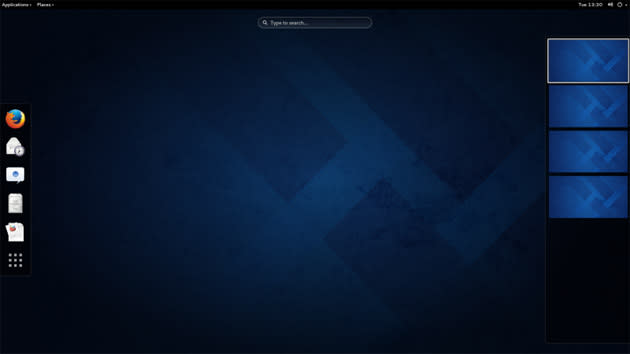 On both desktops and servers, Fedora has seen popularity slip behind relative Linux new comers like Ubuntu and Mint. But Red Hat knows its strength lies in the enterprise, where its impressive security features have found love in the arms of sysadmins all over the globe. While we wouldn't say the release of version 20 (Heisenbug) is putting it ahead of the curve, it's certainly a valiant effort to future-proof the distribution. As the world preps for an explosion of ARM-powered servers, Fedora is finally adding support for the RISC-based processors to it's official channels. Until now support for ARM chips has been provided by unofficial community developers. Going forward, ARM will receive the same level of support that x86 chips from the likes of Intel and AMD have enjoyed for years. It also preps the distro for a market flooded mobile devices that emphasize form factor and battery life over raw processing power.

In another nod to its business customers, the OS has greatly improved virtualization support through both a new visual interface and the addition of virtual images crafted specifically for cloud computing services like Amazon Web Services and OpenStack. There, of course, are updates to desktop environments like GNOME and KDE, too for those more likely to install it on a home PC. Whether you're setting up an ARM server or just appreciate Red Hat's nod to Breaking Bad, you'll find full details of the Heisenbug upgrade at the source links.

In this article: arm, enterprise, fedora, fedora20, heisenbug, linux, opensource, OperatingSystem, redhat, server, software
All products recommended by Engadget are selected by our editorial team, independent of our parent company. Some of our stories include affiliate links. If you buy something through one of these links, we may earn an affiliate commission.