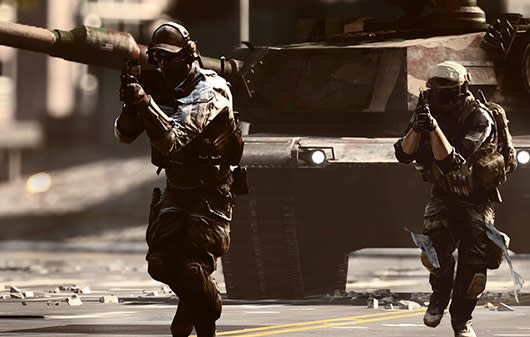 Battlelog offers extensive explanations for each patch, so we'll cover the highlights. The PlayStation 3 game should now crash less frequently as well as allow players to more easily connect to online games. This patch also goes a long ways toward snuffing players' ability to trade kills and thus artificially pad their stats, though DICE continues to work on a permanent solution to this problem.

The Xbox 360 game is likewise receiving stability improvements, both online and off. It, too, is seeing a fix for the kill-trading issue, though perhaps more crucially, it also squashes multiple bugs that could leave a player stranded at the respawn screen after attempting to return to battle.

Unsurprisingly, stability improvements are directly cited in the PlayStation 4 patch, along with a number of fixes now said to be in place to prevent more common crashing scenarios. Kill trading has been fixed here too, though more notably the patch is also said to remove the periodic audio drops players experience from time to time.

These patches follow hot on the heels of an Xbox One patch designed to fix many of the same issues outlined today. All of these updates are free of charge, and should be downloaded to your game the next time you fire up your console of choice.
In this article: battlefield-4, dice, ea, microsoft, patch, playstation, ps3, ps4, update, xbox
All products recommended by Engadget are selected by our editorial team, independent of our parent company. Some of our stories include affiliate links. If you buy something through one of these links, we may earn an affiliate commission.