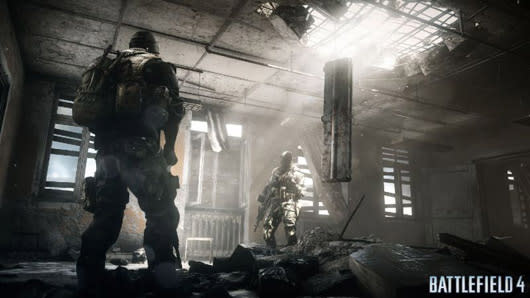 Battlefield 4 has seen numerous patches in the weeks following its release, addressing major issues ranging from client crashes to save file corruption. The suit highlights the PlayStation 4 version of Battlefield 4 in particular, claiming that "players of Electronic Arts' games were being subjected to multiple glitches and significant crashes when attempting to play Electronic Arts' titles on PS4."

The Robbins Geller Rudman & Dowd suit marks the second time a law firm has targeted Electronic Arts over Battlefield 4 this month. Previously, Holzer Holzer & Fistel, LLC launched an investigation to determine whether EA misled investors regarding Battlefield 4's projected impact on company revenue. The results of this investigation have not yet been disclosed.

Individuals who purchased EA common stock between July 24 and December 4, 2013, have until February 15 to contact Robbins Geller for representation in the firm's class action lawsuit.
In this article: battlefield-4, class-action-lawsuit, ea, ea-dice, electronic-arts, lawsuit, legal, microsoft, pc, playstation, ps3, ps4, xbox, xbox-one
All products recommended by Engadget are selected by our editorial team, independent of our parent company. Some of our stories include affiliate links. If you buy something through one of these links, we may earn an affiliate commission.