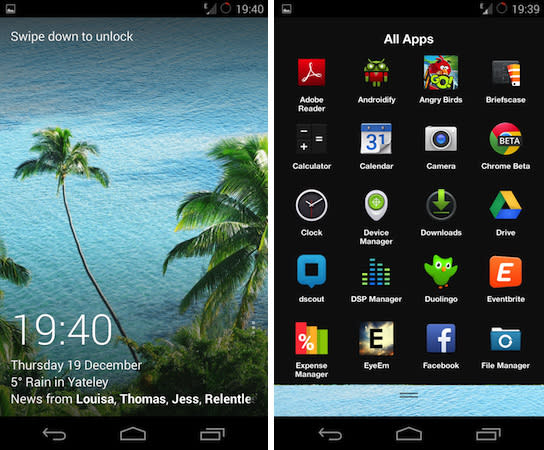 Facebook hasn't forgotten Home, the Android launcher that originally came out this past April and has trickled out to a few select handsets since. The social network just posted a video showing an upcoming update to Home, although it still hasn't shown up in the Play Store yet. According to the video, the new update will feature a new lockscreen which lets you use your own wallpaper, rather than being surprised with a random picture and status update every time you wake up your phone; at the bottom you'll also see details on which of your friends has recently posted a status update, as well as the current weather and quick access to your Home settings. A swipe down from the top will now unlock the phone and take you to your apps, and each status update will have a menu in which you can hide posts from that particular friend. There's no word from Facebook on when we can expect to see this update, but we've reached out to the company for more details and will update the post as soon as we get more details. In the meantime, check out the video below to see if this makes you want Home any more than you did (or did not) before.

Update: Facebook has confirmed that the update has been available to beta testers for a few weeks and will be rolling out to users in the next hour or so.

In this article: facebook, google, mobilepostcross
All products recommended by Engadget are selected by our editorial team, independent of our parent company. Some of our stories include affiliate links. If you buy something through one of these links, we may earn an affiliate commission.