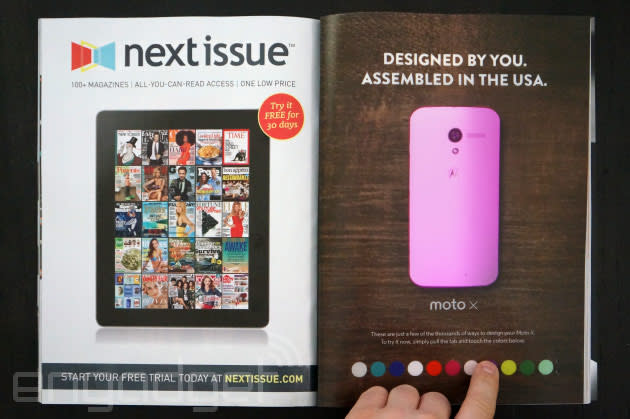 Designing compelling interactive ads for web is hardly a challenge for experienced marketers, but engaging print magazine readers in a similar way requires significant creativity. One method is through technology -- Esquire stood out at newsstands with its attention-grabbing E Ink cover in October 2008, and Forbes turned some heads with a Microsoft ad earlier this year that integrated a functioning T-Mobile WiFi hotspot -- but Wired's January 2014 issue shall not go without mention, thanks in no small part to a partnership with Motorola.

A trio of LEDs, a slab of plexiglass, four batteries and an array of buttons make up an interactive Moto X ad, right in the middle of the magazine. The design enables readers to "customize" a Moto X's rear, with bright LEDs illuminating the phone in 11 different colors. Tap blue and the phone lights up blue, yellow and it's yellow, red for red, and so on. The ad shuts off after a few seconds of inactivity, so those four lithium batteries should last you for quite some time, serving as a reminder of Moto's accomplishment long after the smartphone is laid to rest, while boosting this issue's appeal for collectors as well.

Digitas, the advertising agency tasked with creating the ad over the last six months, says 150,000 copies of Wired in New York and Chicago will include the interactive advertisement. It's available on newsstands in those cities as well, so you should be able to get your hands on one even if you're not a subscriber. It's a costly endeavor, no doubt, but if today's publicity is any indication, it should pay off. Take a closer look in our hands-on (and teardown) video, embedded after the break.

22
In this article: google, hands-on, mobilepostcross, moto, motomaker, motorola, motox, video, wired
All products recommended by Engadget are selected by our editorial team, independent of our parent company. Some of our stories include affiliate links. If you buy something through one of these links, we may earn an affiliate commission.