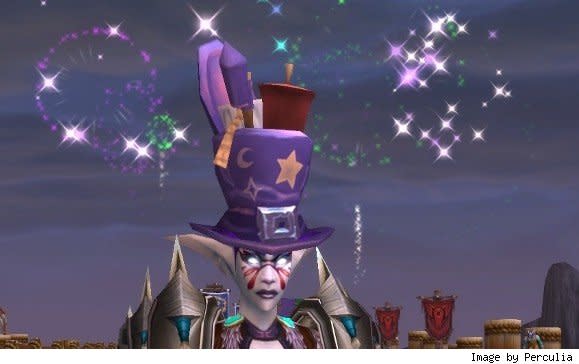 Welcome back to the Best of WoW Insider series! If you're new to WoW Insider, every December we run a retrospective series on the best articles from the previous year and/or those pieces that most ably captured the zeitgeist of the WoW community. There'll be one retrospective post each day through December 31st, so keep checking back as we count down.

We start today with January 2013, which saw patch 5.2 reach the PTR for the first time. Like other months in which the current raid content is stale and we're waiting on new PTR news, it was a very busy month for opinion pieces and the art scene. The latter in particular saw one of the year's most popular videos debut at the end of the month.

For some reason, GC also popped up in the news a lot this January. Patch 5.2 PTR now live; character copies available Blizzard didn't waste any time and dropped the PTR on January 2. It was a bleary-eyed, hungover bunch of players that saw Thunder Isle that first day.

Bashiok returns to the WoW team Better known to many players as Drysc, the beloved CM reassumed his post on the WoW team after working on Diablo 3.

Ghostcrawler tells 8-year old how to be a game designer Not only was it excellent advice, but it was also an incredibly kind thing for Ghostcrawler to do.

Data suggests mage changes solved spec issues Mages had one of the most hilariously lopsided spec populations during early Mists raiding -- over 90% of raiding mages were specced fire at one point -- and then Blizzard started tinkering. There are a lot of unhappy mage players in the comments who opined that arcane got fixed less than fire got broken.

Why Ghostcrawler appears in the credits to Starcraft I This was an oddly busy month for GC in the news.

Level 80 paladin solos some Mogu'shan Vaults bosses, gets Vengeance hotfixed Stay tuned, folks. This was not the most shocking example of a player soloing then-current raid content in 2013.

Ghostcrawler and Dave Kosak switch jobs for an evening on Twitter Those of us not raiding that evening had an entertaining night watching the mock Twitter war. Breakfast Topic: Best race, worst start zone The first post of the year, and a subject on which many players had very strong feelings. Interestingly, it was less the specific zones and more the sense of being trapped within particular ones (death knight, goblin, worgen, and pandaren) that players disliked. Overall, there seems to be a broad consensus that the goblins are the best race with the most tedious beginning.

Valor points and player choice and We don't need daily quests anymore I'm listing these together because I think Rossi and Anne approached the same problem from different perspectives. The river of dailies at 90 was still a sore point for players several months into Mists, and having to "babysit" a small valor cap was equally annoying. Behind both complaints was the sense that Mists had a lot of cool things that players would much rather be doing.

Are our Cataclysm attitudes ruining Mists? Olivia raised a point I hadn't considered, which is that Cataclysm made it a lot easier to enjoy your alts, whereas Mists seemed to actively punish it.

Officers' Quarters: 7 tips for becoming an officer Scott and I differ on this issue somewhat. I would have included a very succinct bit of advice -- "Don't" -- for a certain breed of player.

Playing with grey morality Playing a character trying to navigate a difficult social and political landscape with questionable decisions is a lot more interesting than playing one who's always a goody two-shoes.

A game frozen in amber As Rossi observed in back-channel discussion, if WoW never changed from that time you really liked it, it would die.

Does everything have to be fun? "A lot of the stuff in this article got yanked from the game, so I'd argue Blizzard answered with a Yeah."

Is it time to kill flying mounts? Question asked in January and then answered (to the unhappiness of many) in November.

WoW Moviewatch: Tides of War One of the most popular videos of the year and deservedly so. As Ravyncat1 argues in the comments, this feels like what the Theramore scenario should have been for the Alliance.

Around Azeroth: If I can just get through this lonesome place Blizzard's tribute to Lonesome George.

WoW Moviewatch: Make Hordies Out of You Another very popular video with an all-star voice cast and an earworm song.

Oveoflod shows old models still have new tricks This was technically from 2012, but it flew under our radar for a depressingly long time. Oveoflod shows the kind of performance you can get from WoW's increasingly ancient models with a little (okay, a lot of) elbow grease in animation programs.

Around Azeroth: A send-off to the happy hunting grounds Can the WoW community damage your faith in people? Yes, but it can also restore it.

WoW Moviewatch: A Forever Parody "This is for those single, and aware of it."

The Warcraft movie is alive and Duncan Jones is the director 223 comments later, the two takeaways from this announcement were: a). Good choice, and: b). Please don't let this movie suck. The Care and Feeding of Warriors: Never mind about haste There was a brief period (very brief) on the patch 5.2 PTR in which arms became competitive with fury DPS due to a proposed haste change. It didn't last.

How to get a world record challenge mode time Almost a year later, this is still the standard way to handle the Siege of Niuzao Temple challenge mode, and yes, it's as terrifying as it looks.

PvP on the PTR, and predictions for 2013 A great piece from Olivia summing up the state of PvP in the run-up to patch 5.2. Ghost0who0walks in the comments had a pretty good suggestion for making the battleground queues a little easier to weather.

Addon Spotlight: WeakAuras, getting started, and strings WeakAuras is a fantastic mod, but you'll have to put some work in to get any serious benefit from it. We tried to make it as easy as possible.

Should green fire be prestigious? I don't play a warlock at all, but I loved this Blood Pact from Megan. One of the more exciting bits on the PTR was datamined information on the warlock "green fire" quest, but we knew very little about how it got started or how difficult it would be. What Megan wrote was less a class-specific column and more a set of observations on what determines "prestige" in WoW, and why so many forms of it can damage how you experience the game. WoW Archivist: The triumph and tragedy of Ulduar Ulduar is a frequent pick as the game's best raid, but newer players don't have the context to see just why it was so amazing. To this day the 25-man Yogg-0 remains the most frustrating and yet rewarding encounter I've ever done.

What you should plant on your Tiller's Farm Basil breaks down the most lucrative crops for each profession to plant. And if all else fails, Songbells.

Know Your Lore: The genesis of Garrosh Hellscream We didn't know it at the time, but this wound up being a fairly prescient article on Garrosh's motivation and ultimate trajectory as a character. As a bonus, I'm going to cheat and include an article that Anne wrote from a more personal perspective on the last day of 2012. It's valuable to understand why Garrosh acts as he does, but that doesn't mean that every Horde player was a willing participant.

Know Your Lore: The limits of perspective You as a player might know a great deal about Azeroth's history and political developments. Does your character know? It's probably best not to assume that she does.

The mysteries of an old alt's vault Alex blows the cobwebs off a rogue alt's bank and wonders: "Why did I need so many shirts?"

Reforging, itemization, and the player This was another issue that resurfaced at BlizzCon, but not in the way we expected.

Seven things every newbie needs to know I am ashamed to admit that some of Elizabeth's observations would have changed my playing experience even several months into the game.

Know Your Lore, Tinfoil Hat Edition: In the beginning The Titans get scarier and scarier the more you think through their possible motives.

Know Your Lore: Hands drenched in blood Lor'themar Theron became a significantly more important and assertive character as the expansion advanced. It can be argued that he's the only faction leader in the game with a true diplomat's eye for advancing his peoples' interests, present oaths of loyalty be damned.

The Queue: In which we don't non-stop chain pull This one interested me because tanks, DPS, and healers all tend to approach the titular issue differently, and boy, will you ever see that in the comments.

WoW Archivist: Many memes, handle it If you see something constantly repeated in guild or trade chat but don't know where it comes from, you're guaranteed to find it here. More seriously, this should cover you for about 75% of ingame conversations.

2013's drawing to a close, and we're wrapping up the most interesting articles we've published all year, one day at a time. Join us every day for the next twelve days with this year's best of WoW Insider!
In this article: 2013-wow-insider-best-stories, 2013-year-in-review, best-of-wow-com, best-of-wow-insider, best-of-wow.com, featured, wow-insider-2013-best-stories, wow-insider-year-in-review, year-in-review
All products recommended by Engadget are selected by our editorial team, independent of our parent company. Some of our stories include affiliate links. If you buy something through one of these links, we may earn an affiliate commission.