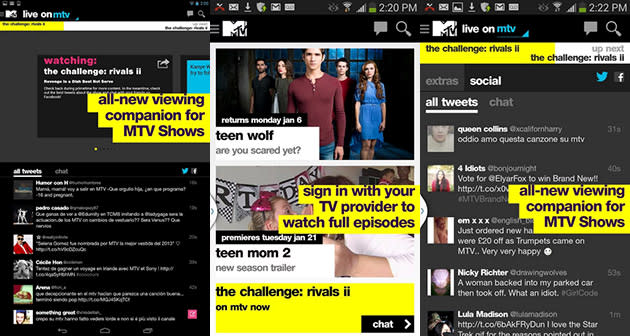 Android users don't have to look blankly at their iPad- and Xbox-using friends whenever they talk about Catfish anymore, now that the MTV app has arrived on Google Play. It offers on-demand streaming of recent episodes from select series, but only for subscribers of participating cable providers. The list of cable companies is quite lengthy (it includes AT&T U-Verse, Time Warner and Verizon FiOS, among others) but it's missing some notable ones like DISH, at least for now. Unlucky folks who can't access full episodes can always watch trailers and look at companion content for MTV Shows, including polls and behind-the-scene tidbits. Or, you know, they can look for their video fix elsewhere instead -- some of those other sources even come with actual music videos.

In this article: android, app, cable, hdpostcross, mobilepostcross, MTV, streaming
All products recommended by Engadget are selected by our editorial team, independent of our parent company. Some of our stories include affiliate links. If you buy something through one of these links, we may earn an affiliate commission.