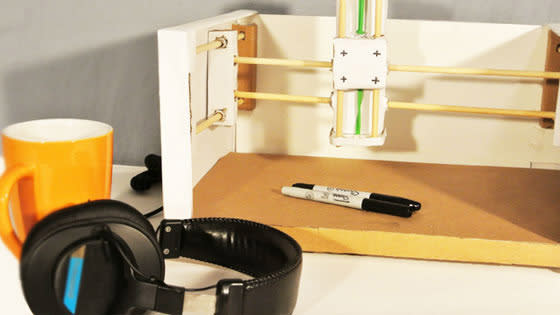 Oh, the lowly box. It spends most of the year being broken down, stashed away and pulped, but one day a year, it gets its moment to shine (at least in the UK and various Commonwealth Nations). Consider the ShoeboxCNC a continued celebration of the cardboard vessel, a kit you build from the box it arrives in. The router is an Arduino-controlled CNC fabrication machine you can put to use for all sorts of things that require an arm that moves on the X Y and Z axes - from cookie frosting to picturing painting (with varying degrees of success, of course). It's not exactly a heavy duty router or miller - more the sort of kit you'd expect from something made out of cardboard. Still, it looks to be a fun weekend activity for burgeoning makers - or a nice classroom project. The company's just opened up its Kickstarter, hoping to harness a bit of that spirit of giving. $250 will get you a kit scheduled to be delivered around this time next year, for an early Boxing Day celebration.

In this article: arduino, cnc machine, kickstarter, ShoeboxCNC
All products recommended by Engadget are selected by our editorial team, independent of our parent company. Some of our stories include affiliate links. If you buy something through one of these links, we may earn an affiliate commission.