NYPD's cruiser of the future knows if you're on the lam, can detect radiation

EVE Evolved: Getting ready for Rubicon 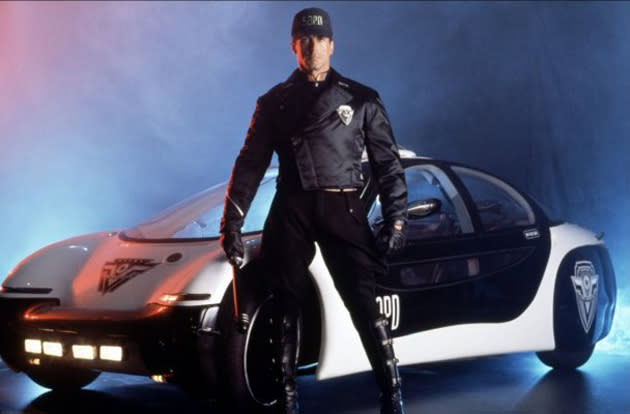 New York City's Police Department is one of the most well-financed in the world, and the prototype for its next-generation patrol car clearly reflects that. A rear-mounted infrared sensor scans, records and checks license plates against a database (yes, in real-time), not too far from a new radiation detector in the rear window. An in-car, dashboard-mounted surveillance camera captures video, which can be livestreamed to headquarters via a modem and power supply sitting in the trunk. If this all sounds spookily like Demolition Man's future police (pictured above), that's because it's very similar.

Only one such prototype is cruising the streets thus far (in Brooklyn Heights), though the Wall Street Journal's report says the data it gathers is being implemented city-wide. It's unclear how much (all?) of this tech will make its way to the rest of the NYPD's vehicle force, though a variety of components are already in place on other cars. It's all part of a 13-page report prepared for exiting New York Police Commissioner Ray Kelly centered on the concept of "NYPD2020" -- the NYPD in 10 years' time. A variety of other projects from that report are also in the works, though many are distinctly less exciting (an online, public database of incident reports, for instance).

In this article: cruiser, newyorkcity, newyorkpolicedepartment, nyc, nypd, nypd2020, policecars
All products recommended by Engadget are selected by our editorial team, independent of our parent company. Some of our stories include affiliate links. If you buy something through one of these links, we may earn an affiliate commission.