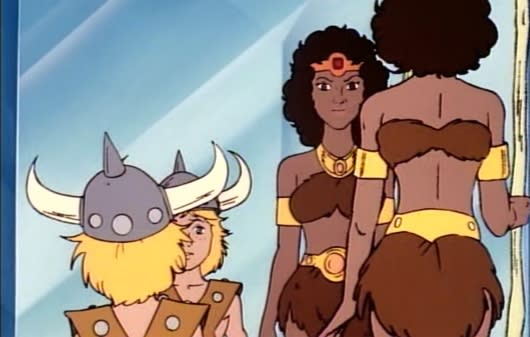 As the light slowly fades from 2013, we spend our final moments quaffing eggnog, putting up President's Day decorations, and reminiscing about the year that was. We stare at the past and realize that it's a mirror reflecting our own journeys through the past 12 months. We contemplate the impact of one small decision that ripples out and touches souls everywhere. And then we stop getting so maudlin and start getting excited for what 2014 has to offer.

For me, I live for end-of-the-year lists. Man, I love 'em. I will devour them, drinking up everyone's opinions about what what the best what, what movies or songs I should check out, and what idiocy drives some people to write top 10 lists. Seriously, am I right? Learn to use a paragraph format, people!

Well, here's my top 10 list covering the year's top stories in the MMO industry. Some are pretty obvious, some will be up for debate, and all will be in the past soon enough. So what will historians say about 2013 and online games? Since 2009, we've seen a domino cascade of MMOs fully embracing the free-to-play (and buy-to-play) models while fleeing the sub-only format of the past. As such, it was an absolute shocker that both WildStar and Elder Scrolls Online announced -- in the same week, no less -- that both titles would eschew F2P for subscriptions. Were we too quick to announce the death of subscription-only MMOs? Maybe, but one thing's for certain: These announcements forced gamers to evaluate whether or not these MMOs would be worth a recurring payment to play, and all before most folks actually got to see the games.

Both of these games made a lot of waves this year for, well, pretty much everything they announced, from delays to beta tests to platform ports. But the business model definitely scooped it all and then topped it with a controversy cherry.

It wasn't a completely horrible year for Trion Worlds (see #9 down there and the surprise announcement of Trove), but the studio probably would rather put 2013 firmly in the rearview mirror for all of the pain that it caused. The studio weathered layoffs in May followed by branch closings in August. Former RIFT lead Scott Hartsman returned to take up the CEO position and help clean house, although the fruits of these changes have yet to be seen.

On top of that, two of the studio's promising games fell into limbo. End of Nations struggled through the year unfinished, ultimately resulting in Trion firing the developers, taking it in-house, rebranding it as a MOBA, and then pretty much abandoning it. And then, well, then there's ArcheAge. Remember being excited about ArcheAge because you actually thought it was coming overseas? It doesn't look as if that's going to happen any time soon, and even when it does, there might be substantial changes to the sandbox nature of the game. Bummer.

After more than a decade of studios and publishers flirting with the idea of combining consoles and MMOs, it was this year that everyone seemed to get really serious about it. The PlayStation 3 got DUST 514, Final Fantasy XIV, and Defiance, while Xbox 360 players enjoyed World of Tanks making the journey over. Much more than that, however, were the promises of future console titles for 2014, such as Destiny, Elder Scrolls Online, and Diablo III. The new Xbox One and PlayStation 4 had several studios making promises that their games would be included in that audience-rich environment.

Whether or not MMOs will flourish on consoles the way they have on PCs is unknown to me, but it's hard to deny that there's been a serious push in the industry to make these ports and exclusives happen. I'll leave you with Beau's excellent coverage of all of the options that MMO fans have for console gaming if you want the full scoop. 4. The Oculus Rift starts to make inroads with MMOs

Virtual reality suits might be a long way off for us MMO players (and c'mon, that would mean we'd have to actually move!), but I've gone from dismissing talk of the Oculus Rift headset to paying rapt attention this year. My interest has come from its involvement in two projects that are somewhat in our neck of the woods: Wander and EVE Valkyrie.

We saw the Rift pop up in other places, such as with Star Citizen's devs, EverQuest Next's devs and Vendetta Online. It's starting to make me wonder whether this device or something very much like it will be the "must get" gift in 2014 or 2015. Right now this is all very niche-of-the-niche, but it's gone from being an abstract idea to something that's garnered serious development support. That's worth noticing, and that's why I believe it's worth a spot on this list.

5. Warhammer Online gets the axe

Every year we witness many smaller MMOs be cancelled, although 2013 went surprisingly easy on the bigger name titles. Really, we got off lightly with only one major sunset this year, and that was Warhammer Online.

Of course, it was no big surprise to anyone who had been following the game since its 2008 launch. WAR had a strong following but a half-finished game that started bleeding subscriptions and developers over the next couple of years. Mythic attempted to repurpose its assets to make a MOBA, but even that tanked in early 2013. And so it was on WAR's 5th anniversary that the studio announced it would be pulling the plug due to low numbers and a lack of license renewal.

It's a bit of an understatement to say that we were on the edge of our seats when SOE finally revealed the details of EverQuest Next. We perhaps should not have been sitting on the edge of our seats because we then promptly fell off when the studio announced that it would be releasing a second game, EverQuest Next Landmark. Even though SOE is still struggling to adequately describe what Landmark is to players, this sandbox and the gorgeous hybrid of EQN got a lot of loyal and new Norrathians exuberant about the future of the franchise.

You know why people are loudly proclaiming that WoW is back with the news of its Warlords of Draenor expansion? Because if they're loud enough, they think they can drown out the rest of the year's rather disheartening news of WoW's public decline.

The once-untouchable leader shed subscribers in staggering amounts this year, going from 10 million players with Mists of Pandaria's launch to 7.6 million by November. It's still a very strong playerbase, no doubt, but WoW is far from its glory days of 2008-10. To put it another way, the game hasn't had these few subscribers since the vanilla era.

And for those hoping that Titan would be the imminent successor to the Azrothean throne, well, bad news on that front too. It looks like Blizzard proclaimed a "do-over" with Titan while shifting much of its personnel and resources elsewhere.

Out of the ashes of one of the most disastrous and devastating launches of all-time was a comeback story that proves MMOs can be retooled and relaunched to great acclaim. Final Fantasy XIV's initial 2010 release was plagued with bugs, bad game design, and a studio apparently out of touch with its players. But with a new team and a declaration to rework the game into a second iteration, Square-Enix fashioned a FFXIV that was met with praise and great player numbers when it relaunched this past summer.

For a good long while, RIFT was a strong hold-out against the free-to-play crowd, but this past spring Trion Worlds finally gave in and joined the popular crowd. The result ended in a win-win for the studio and players: RIFT started producing player numbers and profits above and beyond what the studio previously had, and players got to enjoy one of the more generous F2P models in town.

10. Star Citizen breaks fundraising records over and over