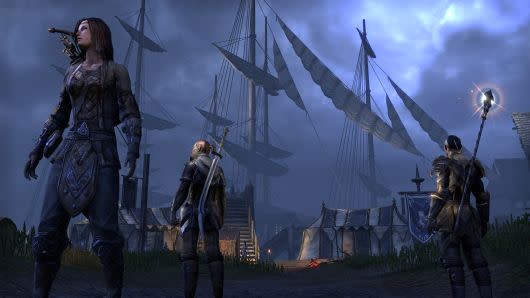 In the last month, Massively staffers (and no doubt some of you readers!) have taken part in several high-profile beta tests, and they all seem to fall into one of two categories: those that guard their games behind NDAs thick enough to protect all the gold in Fort Knox, and those that just don't seem to care. And I've gotta say, when my screenshots come out with watermarks plastered all over them, obscuring what I'm looking at and preventing NDA-breakers from ripping videos, nowadays my gut reaction is not wow, what a well-organized beta but dude, what are they trying to hide?

Diablo III's upcoming expansion, by contrast, slipped into closed beta with a wink and a shrug and nary an NDA in sight. Talk about us, Blizzard seemed to say. Screencap us. We're gorgeous. We're ready. But upcoming major MMORPGs give off a terrified vibe, even when they have nothing to be worried about. NDA violators will break their agreements anyway, and the studio relinquishes the control it seeks to retain to exactly the malicious testers it hoped to squelch.

What do you think -- are MMO beta NDAs counterproductive?

Every morning, the Massively bloggers probe the minds of their readers with deep, thought-provoking questions about that most serious of topics: massively online gaming. We crave your opinions, so grab your caffeinated beverage of choice and chime in on today's Daily Grind!
In this article: beta, beta-test, brianna-royce-tdg, counterproductivity, daily-grind, diablo-3, diablo-iii, elder-scrolls-online, eso, nda, non-disclosure-agreement, opinion, tdg, the-daily-grind, watermark, wildstar
All products recommended by Engadget are selected by our editorial team, independent of our parent company. Some of our stories include affiliate links. If you buy something through one of these links, we may earn an affiliate commission.