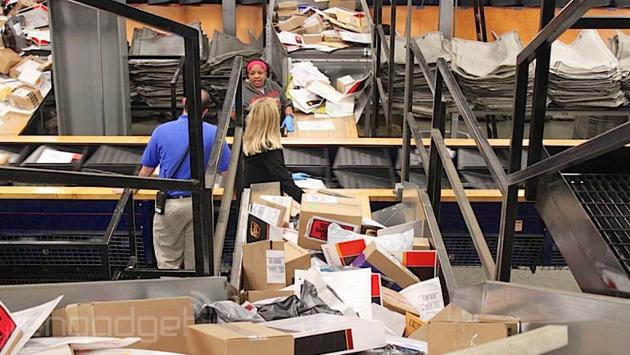 Didn't get your Christmas presents in time? You're far from alone. Seems that both FedEx and UPS greatly underestimated the number of packages that would be passing through their systems this holiday season. More consumers are doing their gift shopping from the comfort and safety of their computers, bombarding our already stretched parcel services -- it's not surprising that something had to give. According to a spokesperson, FedEx handled roughly 275 million packages between Thanksgiving and December 22nd, while the US Postal Service said it saw a 19 percent increase in volume over last year (UPS declined to say exactly how much its expectations were exceeded). While these companies insist that the vast majority of packages were delivered by their promised December 24th deadline, a small portion did not make it in time to be placed under the tree on Christmas morning. Both the delivery companies and retailers are working to repair the damage, but the writing may be on the wall for 2014. The deadline for Christmas orders will undoubtedly be earlier next year, but the more immediate problem will be making things right with consumers this year.

A number of companies, including Amazon and Kohl's, have been proactive in addressing the situation. The former is refunding associated shipping fees and even offering $20 gift cards to those who didn't receive their packages by the 24th. Kohl's is contacting customers whose deliveries were delayed and offering to fully cover the cost of items delivered late. Walmart also appears to have suffered at the hands of over-extended delivery companies and is offering customers gift cards (usually $25) as an apology. Additionally, 1-800-Flowers also saw a small percentage of its orders delayed and is offering $20 refunds, while Groupon is handing out $25 toward a future purchase.

Next holiday may see scaled-back promises from both retailers and shipping companies, as well as increased investment in infrastructure, but this year's issues do not appear to be due to a lack of effort or preparation. UPS workers put in plenty of overtime and even made deliveries on Sunday, but it simply seems that its network was not capable of keeping up with the flood of last-minute orders. Amazon also did its best to avoid complications by hiring 70,000 seasonal workers, only to be thwarted by overwhelmed delivery companies. If your packages didn't arrive on time, you can contact the retailer's customer service to see what sort of compensation they're offering. Though, your best bet is to get your Christmas shopping done before December 23rd next year.

In this article: amazon, delays, fedex, groupon, kohls, shipping, ups, walmart
All products recommended by Engadget are selected by our editorial team, independent of our parent company. Some of our stories include affiliate links. If you buy something through one of these links, we may earn an affiliate commission.