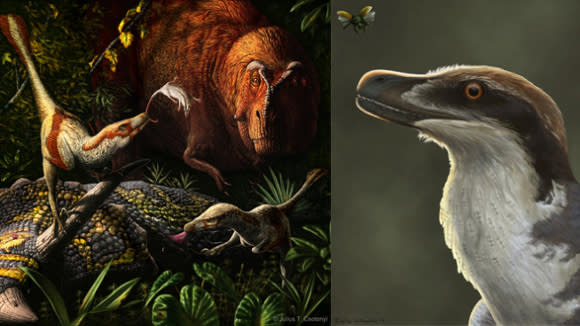 Welcome back to The Queue, the daily Q&A column in which the WoW Insider team answers your questions about the World of Warcraft. What a surprise, it's a Matthew Rossi written Queue and it nerds out about dinosaurs. I did not see that coming at all.

Acheroraptor temertyorum (the name basically means 'Hell Thief named after Temerty') is a 'new' dromaeosaur that, while of course not new at all (since no new dinosaurs can really exist, unless you define birds as dinosaurs) is one we're just now starting to know about. It's a fairly basal member of the Velociraptorinae, so we're not looking at another Achillobator or Utahraptor here. According to the Edmonton Journal article (which interviews Phillip J. Currie, who's kind of a rock star among paleontologists) Acheroraptor was about three meters long and weighed around 40 kilograms, or 88 pounds. Keep in mind that so far, all we have of Acheroraptor is some teeth, so these are all estimates based on similar animals, but it's still fascinating to me because it reveals how much we don't yet know about life on Earth over the hundreds of millions, even billions of years of its existence.

I'm looking forward to hearing more about Acheroraptor myself. In the meantime, let's talk about World of Warcraft, shall we?

QftQ: If Blizzard created a realm that had two limits; 1. Only one character allow and 2. No BoA items. How much different would this realm be compare to the others and could a realm like this be fun to play on as a PvP or PvE?

Seems to me that the only people who would like playing on it would be people with no alts. If they added a Hardcore ruleset to it and made it so people playing on it could only die once and then would have to start over with a new character at level 1 again, some folks might play it just for the bragging rights, but man, raiding would be brutal. PvP, too.

I don't know, I don't see a lot of people actually wanting to play on it. For all that people like to pretend that they want harder leveling, I've met very few players who actually eschew all the ways we can accelerate that process.

DuceWild asks:
Question for the Q: What is your obsession with Captain Picard?

Answer: I'm not. If I had to pick a Captain, I'd go with Captain Janeway, because Kate Mulgrew is awesome. But were I being totally honest, I don't particularly care about Star Trek. It's never been that important to me. Now, if it had been all about the Gorn, then maybe. Or the dinosaur people from that one episode of Voyager. Or both.

wrathofkublakhan asks:
Which is better from the shrines on the Timeless Isle? The +20% to stats or the 15% buff to damage?

It would really depend on your class. For a warrior, esp. a DPS warrior, Chi'ji's 25% chance to crit is godly. I annihilate elites like they're nothing when I get that buff. I'd rather have that than anything else, because crit is a warrior's main vice. If I were a caster, I might rather have the overall damage buff, but 20% to stats is pretty good for just about anyone - still, I don't think it'll equate to a flat 15% damage.

geff.fletcher asks:
So you can't close the Dark Portal ... but can you redirect it to the surface of the sun? Once you've evacuated the Draenei with Tempest Keep, I see no problems at all with turning Garrosh's Iron Horde into the Molten Iron Horde with a nice bath of superheated plasma.

That assumes a lot.BnDov3r asks:
Q4tQ: Given what we know about WoD, what are the things you are most eager to try out on the PTR/Beta?

Man, I want to see Karabor. I want to go to Shadowmoon Valley and, on my draenei warrior I want to stand on the steps of the temple and then walk down and kill me some Iron Horde. I want to see the draenei not battered, not nearly destroyed, not on the verge of extinction, but fighting, and I want to fight alongside them. That's what I want to do most of all. I want to save Karabor.

Any idea what is going on? I submitted a bug report on this. Has anyone else seen this behavior?

Commenter AliokWOWDB answered you, but I wanted to make sure everyone gets to see the answer, so here it is - it's a bug, and it seems to be connected to when they started scaling up and down gems and enchants. It's not just you, it's lots of players having the issue. Hopefully it'll get fixed soon.

grpcaro asks:
In the WoD timeline, where exactly are the Ata mal crystals??

We have no way of knowing yet. Some may be in Horde hands, especially if they managed to take Telmor this time, but until we see the place we just can't say.

And there's your Queue for today. I'm pulling for an Acheroraptor pet in Warlords. Oh, and tameable snakes. The python model, Blizz. Please let hunters tame them. You have no idea what it would mean to me.

But Acheroraptor first, because he's way cooler than a snake.

In this article: featured, guide, qa, question-and-answer, wow-answers, wow-daily-answers, wow-daily-questions, wow-guide, wow-player-questions, wow-q-and-a, wow-questions
All products recommended by Engadget are selected by our editorial team, independent of our parent company. Some of our stories include affiliate links. If you buy something through one of these links, we may earn an affiliate commission.