Ants run on tiny treadmills to help track their behavior

NSA can hack WiFi devices from eight miles away (video) 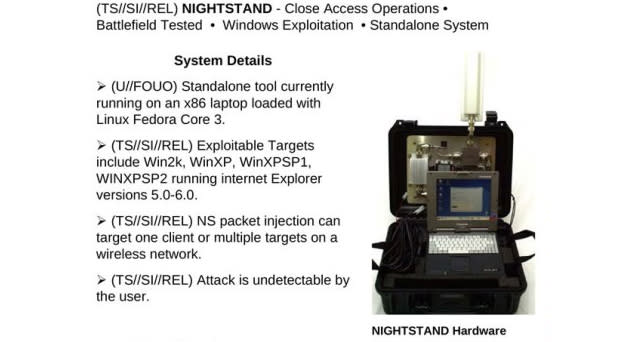 The NSA may have the ability to intercept data from around the world, but we now know that it has some impressive (and intimidating) equipment for snooping on nearby targets. Security guru Jacob Appelbaum told those at the Chaos Communications Congress this weekend that the NSA's big box of tools includes Nightstand, a custom device that can compromise WiFi networks for the sake of inserting spy software. The Linux-powered device can exploit Windows systems from up to eight miles away; it's unlikely that you'll catch agents wardriving in the parking lot. Nightstand may not see significant use today given that it dates back to 2008, but its existence suggests that the NSA also has newer, more advanced WiFi surveillance gear at its disposal.

In this article: ant, networking, nightstand, nsa, privacy, security, video, wardriving, wi-fi, wifi, wireless
All products recommended by Engadget are selected by our editorial team, independent of our parent company. Some of our stories include affiliate links. If you buy something through one of these links, we may earn an affiliate commission.