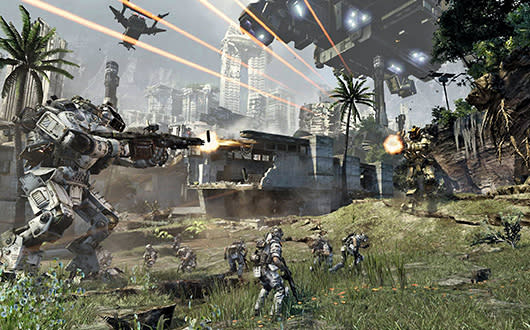 Beyond the joys of stomping people into goo from the cockpit of a giant robot, Titanfall is largely a traditional shooter, though unlike other, modern console shooters Titanfall won't allow snipers to cheat the system.

"Sniping is in the game, but due to how the game plays it's a pretty different animal than you'll find in your run of the mill modern military shooter," claimed "scriptacus," a representative of developer Respawn Entertainment in the game's forums. "Quick scoping and no scoping are ineffective."

For those unfamiliar with the terms, "quick scoping" and "no scoping" allow snipers to drastically increase their fire rate by exploiting the way virtual rifles work. No scoping is simply firing without aiming and relying on the power of your gun to offset your lack of precision. Quick scoping is a practice in which virtual snipers learn to bring up the scope reticle only long enough to squeeze off one, quick shot. On consoles, where auto-aim has become standard, those who have mastered quick scoping can almost guarantee a hit - which is usually all a sniper will need.

How Titanfall's developers plan to counter these tactics is unknown. It could be that players simply move too fast for quick scoping and no scoping to work properly (as in Tribes: Ascend), or Respawn may have increased the amount of time necessary to aim and then fire. We have attempted to contact the developer for further information, but have yet to hear back.
In this article: ea, microsoft, no-scope, no-scoping, pc, quick-scope, quick-scoping, Respawn-Entertainment, sniper, snipers, sniping, titanfall, xbox, xbox-one
All products recommended by Engadget are selected by our editorial team, independent of our parent company. Some of our stories include affiliate links. If you buy something through one of these links, we may earn an affiliate commission.